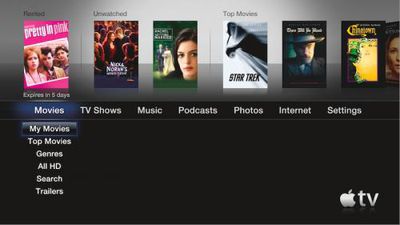 "The new software for Apple TV features a simpler and faster interface that gives you instant access to your favorite content," said Eddy Cue, Apple's vice president of Internet Services. "HD movies and HD TV shows from iTunes have been a huge hit with Apple TV customers, and with Apple TV 3.0 they get great new features including iTunes Extras, Genius Mixes and Internet radio."

The redesigned main menu offers direct access to recently rented and purchased movies, as well as a wide assortment of other content. iTunes LPs and iTunes Extras are available in full-screen, enhancing the viewer experience for audio and video titles.

The addition of Genius Mixes, a feature first introduced last month with iTunes 9, allows users to listen to automatically-selected playlists generated from their iTunes libraries, while the Apple TV 3.0 software also includes support for listening to thousands of Internet radio stations. Finally, the updated software includes additional enhancements for photo viewing, enabling the Apple TV to take advantage of the Faces and Events features found in Apple's iPhoto desktop application.

The impending release of the updated Apple TV software was suggested earlier today by an update to the iTunes Store Terms and Conditions mentioning the 3.0 software.

iTunes 9.0.2 adds support for Apple TV software version 3.0, adds an option for a dark background for Grid View, and improves support for accessibility.

Here we go again. Apple has updated iTunes to version 9.0.2 and Palm Pre sync is dead again using webOS 1.2.1, despite Palm's Hurculean efforts to spoof nearly every aspect of USB identification known to mankind. As with previous breakages, iTunes does launch when you connect a Pre with Media Mode, but it doesn't appear as a device on the sidebar.