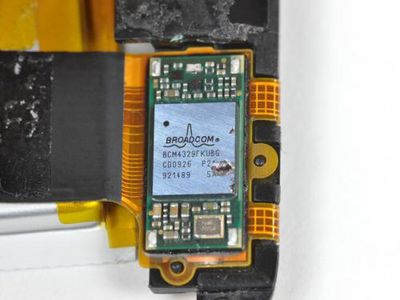 iFixit has managed to get its hands on a 32 GB third-generation iPod touch and is in the process of tearing apart the device to get a look at the internals. While the new iPod touch is similar in many respects to the second-generation model, especially given the absence of a camera module, there are some hardware differences.

One of the more intriguing differences uncovered so far is the inclusion of a Broadcom BCM4329 combination Wi-Fi/Bluetooth chip, which supports the 802.11n Wi-Fi standard in addition to 802.11a/b/g standards. The iPhone 3GS and the second-generation iPod touch utilize a different BCM4325 chip, which supports only the 802.11a/b/g standards. While Apple has apparently not activated 802.11n capability in the iPod touch and it is unknown whether it will choose to do so in the future, the new iPod touch hardware does appear to be capable of supporting the standard.

Hints of the BCM4329 chip were initially spotted in early iPhone OS 3.0 betas, leading to speculation that the next-generation iPhone might support 802.11n. The iPhone 3GS, however, was ultimately released with the BCM4325 chip and thus unable to support the faster Wi-Fi standard.

Other reports earlier this year pointed to the BCM4329 chip's ability to both receive and transmit FM signals as a sign that Apple might look to add an FM tuner and possibly add the ability to transmit audio wirelessly to car stereos via FM radio. At the time, Apple had shown no interest in adding FM capabilities to its iPod line, but Apple's new iPod nano released this week does include an FM tuner, suggesting that Apple may be rethinking that strategy.

Apple routinely does not take full advantage of the capabilities of various hardware components of its devices for various reasons, and there has been no indication that the company has plans to utilize the BCM4329 chip's expanded capabilities, but the possibility of such features being enabled in the future makes for interesting speculation.

Update: iFixit has also revealed that there is a small empty space at the top of the device (approximately 6 mm x 6 mm x 3 mm) where an iPod nano-style camera could fit. The iPod touch does not appear to be thick enough to adequately house an autofocus camera as found in the iPhone 3GS.