Prototype Apple products have been known to appear on eBay. Late last year, a prototype MacBook Air was found by a member of our forum and in March a prototype iPhone was spotted.

Now, it seems a prototype Mac Pro has been put up for sale on eBay, claiming to be an early 2.4GHz dual Quad-Core processor machine. The machine is said to even be able to run Snow Leopard. Photos of the machine are provided and it does contain a red motherboard typical of Apple's prototype machines: 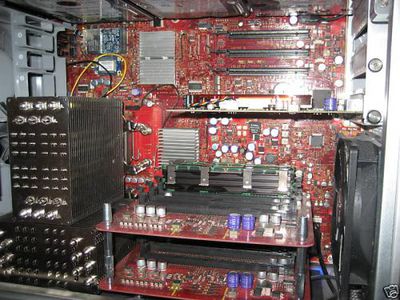 Meanwhile, another interesting prototype machine was found by a forum member back in May. jpo287 purchased a PowerBook that carries an Intel processor and an iSight camera -- features that were never released in a "PowerBook" branded machine. The machine carries a build date of November of 2005 which was two months before the first Intel MacBook Pros were released. For whatever reason, this unreleased PowerBook contains a blue motherboard:

Prototype machines are cool because they are extremely rare, especially from Apple. Personally I collect synthesizers and not computers. However it is cool to find these rare jems.

The problem I have is there are quite a few people that see a couple people getting excited over something, and feel they need to flame. Honestly if you couldn't care less about a prototype machine, then your just a damn fool for reading a theard with the first word being Prototype.
Score: 1 Votes (Like | Disagree)
Read All Comments