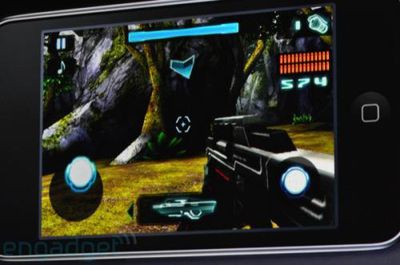 Upcoming Nova, a Halo-like shooter. Photo via Engadget
At today's "It's Only Rock and Roll" media event, Apple focused on games for a significant portion of the event. Apple's Phil Schiller even directly compared the iPod touch to the Sony PSP and Nintendo DS.

And people are starting to see what a great gaming device this is. When you think about the companies that came before us... when you played those other systems, they seemed so cool, but now when you look at them, they don't stack up against the iPod touch.

Schiller then invited developers on stage to demonstrate some new games that hadn't been seen before.


The newly introduced iPod touch also shares the faster processor and improved 3D hardware of the iPhone 3GS, making it even more competitive. While some may doubt that the iPod touch would be a serious threat to dedicated handheld devices, Sony has already made several steps to better compete with the iPhone and iPod touch, and has even recruited popular iPhone developers to port their games to their new platform.
Related Forum: iPhone
[ 75 comments ]