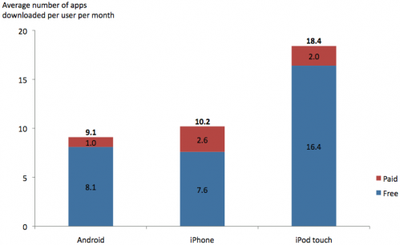 Extrapolating the survey data to the estimated user bases of 26.4 million iPhone users and 18.6 million iPod touch users, AdMob suggests that the total App Store market size may be nearly $200 million per month, or approaching $2.5 billion per year. In contrast, the Android market is estimated at approximately $60 million per year.

AdMob's survey method of soliciting respondents via ads within its own network, which serves 7,000 mobile web sites and 3,000 applications, may skew the survey results somewhat by attracting users more likely to be engaged in mobile applications, but the results do still provide an idea of the substantial market for App Store developers and Apple itself.
[ 66 comments ]