Two reports published today by RBC/IQ ChangeWave highlight user satisfaction and likes and dislikes of Apple's iPhone 3GS and Palm's Pre. The surveys, both conducted in August, show that iPhone 3GS users are far more satisfied with their device than Palm Pre users are with theirs. Among common likes between the two devices are their touchscreen interfaces and ease of use, while common dislikes include short battery life and the lack of support by corporate IT departments.

When it comes to device satisfaction, 82% of iPhone 3GS users are very satisfied, compared to 45% of Palm Pre users. In terms of user expectations, 38% of users said the iPhone 3GS exceeded their expectations, where only 18% of Pre users made the same claim. 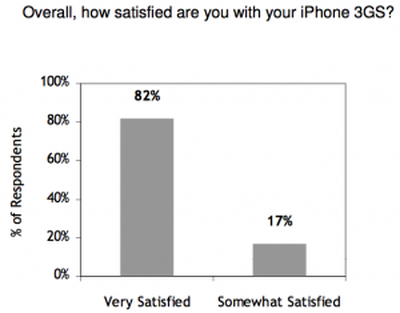 The carrier for the iPhone in the U.S., AT&T, heads the list of dislikes for iPhone 3GS users, with 55% of users citing it as a negative factor. Palm Pre users' only complaint about Sprint, which currently offers the Pre exclusively in the U.S., is that it is the only network on which the Pre can be used - a complaint offered by only 8% of the survey's respondents.

Palm's Pre, largely viewed as one of the premier iPhone competitors of the year, was released in June to early reviews praising its webOS operating system and lamenting its cramped keyboard and short battery life. At release, the Pre was able to sync media through iTunes on a PC or Mac by emulating an iPod. Since then, an iTunes update from Apple disabled Pre synchronization with iTunes and then a subsequent webOS update from Palm re-enabled it. Palm's webOS application store, the App Catalog, is growing but still trails Apple's App Store, which currently features over 60,000 apps, in available software from third-party developers by a wide margin.

Palm has come under fire in recent days in the wake of revelations that the Pre periodically sends what many consumers consider to be personal information, including GPS location and data on app usage, back to Palm's servers. Palm has defended its actions, noting that the company's privacy policy "includes very detailed language about potential scenarios in which we might use a customer's information, all toward a goal of offering a great user experience."