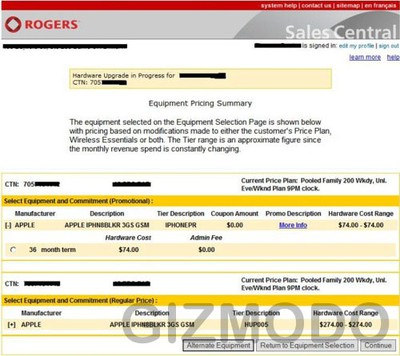 Image from Gizmodo
Gizmodo has received a supposed screenshot from Rogers Wireless' internal sales systems for hardware upgrades listing an 8 GB iPhone 3GS model. Based on the screenshot and comments from the alleged Rogers employee who submitted it, the 8 GB iPhone 3GS will be offered at the same $99 price point of the current iPhone 3G under the standard three-year contract with data plan offered by Rogers or at $299 without a data plan. According to the source:

It clearly shows that an 8GB 3GS has been added to our stock list and is the same price as the 3G coming in at 99$...

The first listing is showing 74.00$ (promo price with data plan and minus customers 25$ discount)

The second listing shows the phone if the customer does not choose a data plan, which is normall 299$ minus said $25 discount, so 274$

I think that when 3G stock runs out they are going to build 99$ 3GSs since those are the parts they are ordering, might as well keep the parts list minimal...

The news follows an initial report of alleged screenshots from Rogers' sales system last week, and the appearance of an iPhone comparison chart listing the model on Rogers' public website. Rogers, however, claimed that the public listing was an error and that there was no such model.

Monday June 21, 2021 7:17 am PDT by Hartley Charlton
Users appear to be underwhelmed by Apple's upcoming iOS 15 and iPadOS 15 updates, according to the findings of a new survey by SellCell. The survey asked 3,000 iPhone and iPad users, evenly split between men and women, aged 18 or over in the United States, what they thought of iOS 15, iPadOS 15, and the naming of the upcoming iPhone 13 lineup. Over 50 percent of all of the survey's...
Read Full Article • 409 comments

Wednesday June 23, 2021 5:07 am PDT by Sami Fathi
Apple earlier today published a detailed report outlining in blatant terms the negative impact that sideloading would have on the iPhone and iPad, specifically calling out the impacts it would have on user privacy and security. Now, the company is continuing its PR push, with an executive noting in an interview that users who wish to sideload apps already have that option thanks to other...
Read Full Article • 370 comments