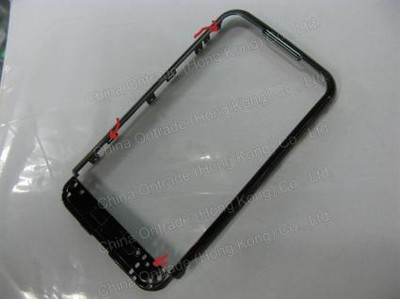 Back in May, an image of an "Apple iPhone 3Gen 2009" bezel appeared on Chinese parts supplier websites. This led many to believe that the new iPhone would adopt a slightly different design with a higher earpiece. As it turns out, it appears the part was real but mislabeled.

CNet Asia provides a hands on with Creative's Zii Egg and provides this photo (above). The Zii Egg is a multi-touch iPod touch-like device that runs Google's Android operating system. The device, though, bears a strong resemblance to the leaked bezel images, suggesting that it had simply been mislabeled all along.
[ 106 comments ]

Tuesday July 7, 2020 6:49 pm PDT by MacRumors Staff
Apple is planning on launching the iPhone 12 this fall which is rumored to be coming in 3 different sizes: 5.4", 6.1" and 6.7". The middle size (6.1") matches up with the currently shipping iPhone 11, but the other two sizes will be entirely new. Over the weekend, there was some excitement about how well the new 5.4" iPhone 12 compares to the original iPhone SE. Those who have been hoping...
Read Full Article • 136 comments

Wednesday July 8, 2020 9:35 am PDT by Joe Rossignol
Despite multiple reports indicating that Apple will not include EarPods or a wall charger with iPhone 12 models this year, one analyst believes that pricing will still increase slightly compared to the iPhone 11 lineup. In a research note provided to MacRumors, analyst Jeff Pu forecasted that iPhone 12 pricing will start at $749 for a new 5.4-inch model, an increase of $50 over the base...
Read Full Article • 244 comments