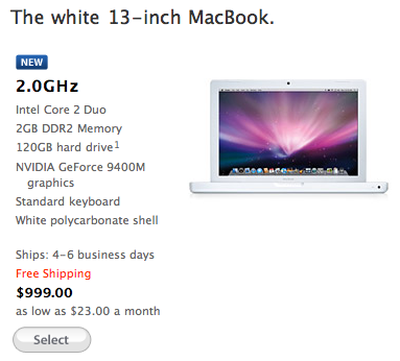 Engadget reports that Apple has quietly updated the entry-level white MacBook, adopting several of the components used in the base aluminum unibody MacBook model. Engadget speculates that the upgrade serves to prepare the last member of Apple's notebook line for the addition of OpenCL in their upcoming OS X Snow Leopard. Updated specs include:

These changes bring the white MacBook much closer in specs to the low-end aluminum MacBook. With the processor and graphics now matching, the $300 premium for the aluminum model primarily offers the new look, faster RAM, a slightly larger standard hard drive, Mini DisplayPort, and no FireWire port.

Pricing remains at $999, with orders currently listed as shipping in 4-6 business days from the US online store. While Apple's Canadian online store is offering the new model, Apple's other international sites and stores have not yet been updated.