The Khronos group announced the ratification and public release of the OpenCL 1.0 specification described as the first open, royalty-free standard for cross-platform, parallel programming of modern processors found in personal computers, servers and handheld/embedded devices. 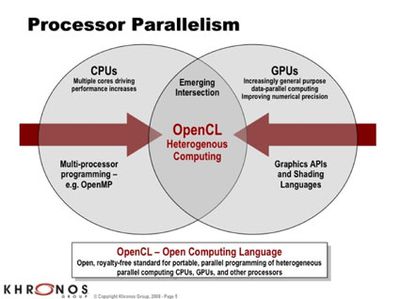 OpenCL provides programmers tools to speed up a wide variety of applications by taking advantage of untapped GPU processors and multi-core processors found in modern computers. Apple originally proposed OpenCL as part of their upcoming Snow Leopard operating system, and their release deadline helped accelerate the adoption of the specification. OpenCL has been developed and ratified by a number of industry companies including Apple, NVIDIA, ARM, Intel, and many others.

We are excited about the industry-wide support for OpenCL, said Bertrand Serlet, Apple's senior vice president of Software Engineering. Apple developed OpenCL so that any application in Snow Leopard, the next major version of Mac OS X, can harness an amazing amount of computing power previously available only to graphics applications.

For the end user, this should allow developers to more easily take advantage of existing hardware (GPUs, CPUs) to deliver faster software performance.

Apple's Snow Leopard operating system (Mac OS X 10.6) is due for release in 2009 with recent hints pointing to the 1st quarter.