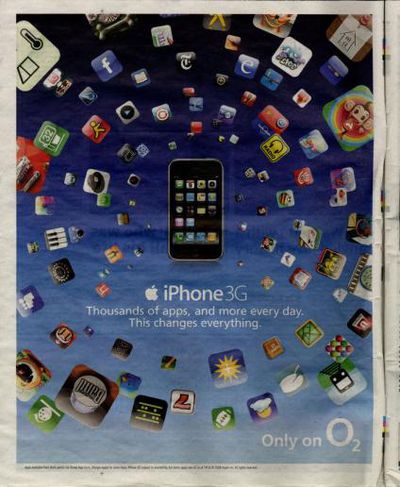 O2 ad posted to Flickr
Both Apple and O2 have started advertising the App Store in print media today. O2 posted a copy of this ad which appears in The Metro. Meanwhile, Macworld reports that Apple has placed ads in The Wall Street Journal and the New York Times.

In the U.S. print ads (not pictured), Apple reports that 300 million apps have been downloaded and confirms that the App Store now carries over 10,000 applications. The App Store crossed over the 10,000 app point on Wednesday and the current App count is 10,353 apps according to AppShopper.

Update: Macworld has published a photo of the U.S. ad.

Sunday September 25, 2022 6:50 am PDT by Sami Fathi
Apple may decide to release its remaining products for 2022, which include updated iPad Pro, Mac mini, and 14-inch and 16-inch MacBook Pro models, through press releases on its website rather than a digital event, according to Bloomberg's Mark Gurman. In his latest Power On newsletter, Gurman said that Apple is currently "likely to release its remaining 2022 products via press releases,...
Read Full Article • 139 comments