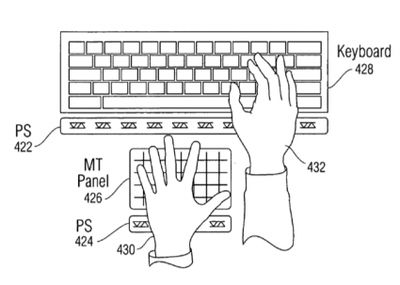 Apple already incorporates a proximity sensor in the iPhone to turn the iPhone's display off, but the patent application explores the concept in desktop and laptop settings. One example given is the automatic display of on-screen buttons when a finger hovers above the screen. Apple might accomplish this by embedding IR sensors within the display itself:

For example, a grid of IR receivers can be placed on the panel, allowing each IR receiver to server as a "proximity pixel" indicating the presences or absence of an object in its vicinity.

The concept is similar to an old patent from 2004 which described the integration of grid of small cameras throughout the display. That configuration had the additional advantage of capturing video. Apple use of proximity detectors could also assist in more advanced concepts they've explored including the detection of specific fingers used in a gesture.

The patent application is an extension of one from 2007, so doesn't represent many new ideas, but continues to show Apple's interest in mixing modes of input to produce a richer experience.