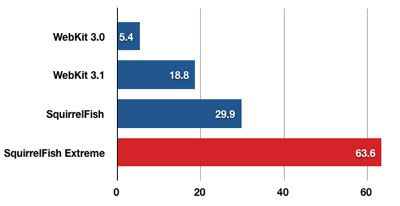 JavaScript is heavily used in many modern interactive websites, including Apple's own MobileMe web apps. Google is also investing heavily in improving JavaScript performance and is working on their own accelerated JavaScript interpreter called V8. According to one blog, SquirrelFish Extreme is 38% faster than the current version of V8.

SquirrelFish Extreme is available in the nightly betas of Webkit for personal testing, and should eventually make its way into future Safari releases.