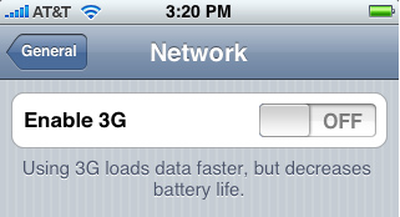 Earlier today we posted a screenshot on our dedicated iPhone blog (RSS) that claimed to depict a new On/Off option to enable 3G speeds. This new preference was found in the latest iPhone 2.0 Beta 5 distributed to developers. By default, the preference is hidden, but one developer (Chronic Productions) claims to have activated it. We have since confirmed that the text shown is indeed in the iPhone 2.0 Beta firmware, so the screenshot appears to be legitimate.

While the iPhone 2.0 firmware appears to contain 3G code, current iPhone owners will not be able to take advantage of the 3G speeds without buying the new iPhone. It appears that Apple will be using a common firmware for both the existing iPhone and the unreleased 3G-capable iPhone.

Also of interest is that due to the higher 3G power consumption, Apple is giving users an option to fall back to EDGE speeds in order to prolong battery life.

The 3G-capable iPhone is widely expected to be released in the coming months, possibly at the Worldwide Developer Conference in June.

Monday June 21, 2021 7:17 am PDT by Hartley Charlton
Users appear to be underwhelmed by Apple's upcoming iOS 15 and iPadOS 15 updates, according to the findings of a new survey by SellCell. The survey asked 3,000 iPhone and iPad users, evenly split between men and women, aged 18 or over in the United States, what they thought of iOS 15, iPadOS 15, and the naming of the upcoming iPhone 13 lineup. Over 50 percent of all of the survey's...
Read Full Article • 375 comments