During the iPhone SDK event today, Apple announced that they would be releasing to developers the same APIs and Tools that they use to create iPhone apps.

Based on existing Mac OS X technologies, the SDK provides a robust package of tools for developers to use to develop iPhone native applications. The SDK is broken down into the following sets:

A software iPhone emulator for Mac OS X is provided to help with development.

Apple wrote a couple of quick demo apps, and also invited software developers to try to see what they could come up with in 2 weeks. EA demoed Spore for the iPhone, with 18 levels, an editor and accelerometer controls: 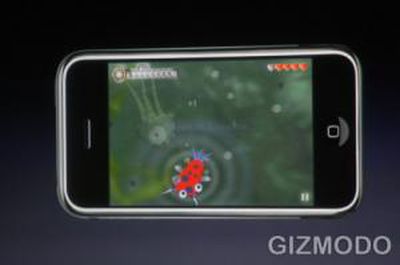 All this will come with the iPhone 2.0 update, in beta today going to thousands of developers. Customers will get it in June as a free software update to iPhone users. Meanwhile, iPod Touch users will be charged a small fee due to accounting issues.

The SDK will be available for free public download, but there is a $99/year fee in order to publish applications to the iTunes App Store.

Additional iPhone news/details to be posted on our iPhone Blog at https://www.macrumors.com/iphone/.