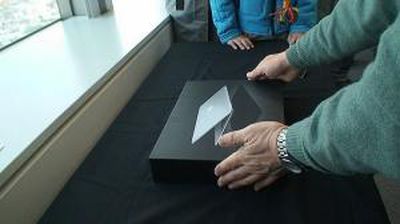 The first unboxing photos for the MacBook Air come from what appears to be a remote Macworld Expo presentation in Japan. The pictures show that they received their demonstration MacBook Air in the retail packaging. Unboxing sequence: 1, 2, 3, 4, 5.

Meanwhile, Macfixit confirms that the MacBook Air is the first Mac to be able to boot wirelessly.

This added functionality required changes in the Extensible Firmware Interface (EFI) and is not presently available on other Macs.

The MacBook Air will be shipping to customers in the next two weeks. A discussion thread has been created for readers waiting for their MacBook Air to ship.