Steve Jobs and Bill Gates shared the stage at the All Things Digital conference with Walt Mossberg and Kara Swisher. 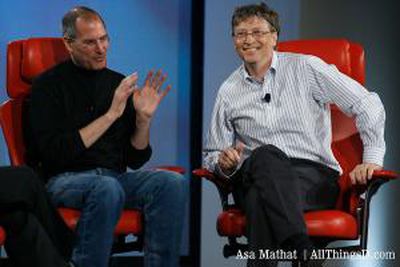 Soon the great Silicon Valley soap opera will come full circle. Not since Apple CEO Steve Jobs famously interviewed Microsoft Chairman Bill Gates as a possible suitor during the Macintosh Dating Game back in 1984 have the two men appeared in a joint bill. And in a few moments, the two will share a stage tonight for the first time in more than 20 years for what promises to be a historic discussion.

Live transcripts are available at the following sites:

"In a certain sense we build the products we want to use ourselves. [Steve Jobs'] really pursued that with an incredible taste and elegance and had a huge impact on the industry. Apple literally was failing when Steve went back and reinfused innovation and risk-taking that have been phenomenal. So the industry has benefitted immensely from his work. I'd say he's contributed as much as anyone," said Gates. - Macworld
"Kara: Are you competitors? I have to admit, I really like PC guy. Steve: The art of those commercials isn't to be mean, it's for those guys to like each other. PC guy is great. PC guy is what makes it work! Big laughs." - Engadget
Apple's goal is much more modest than world domination, said Jobs. "We don't think we're going to have 80 percent of the market," he said, doubtlessly disappointing legions of Mac enthusiasts. "We're happy when our market share goes up a point." - Macworld
"Walt wants them to estimate the core functions of the cellphone-like user device in five years. Gates believes ultimately you won't ever want to edit things on your small device... talking about flexible and rollable displays. Steve: the art of devices is the editing function, what's on it and what's not on it. But it will primarily be a communications device." - Engadget
Walt: .Mac... you guys didn't really develop it. Steve: I couldn't agree more, and we'll make up for lost time in the near future. - Engadget