Plugable, a company that offers a range of hubs, docking stations, storage solutions, and other accessories for Mac and Windows machines this week launched a new external NVME SSD that offers 480GB and Thunderbolt 3 connectivity for incredibly fast transfer speeds.

The Plugable TBT3-NVME480 SSD is designed for Thunderbolt machines like Apple's latest line of MacBook Pro models, and it offers transfer speeds of up to 2400MB/s read and 1200MB/s write.

Design wise, the palm-sized Plugable Thunderbolt 3 SSD is unremarkable. It's made from a solid black brushed aluminum with a ridged design at the sides, and a single LED light on the front that lets you know when it's connected and receiving power. 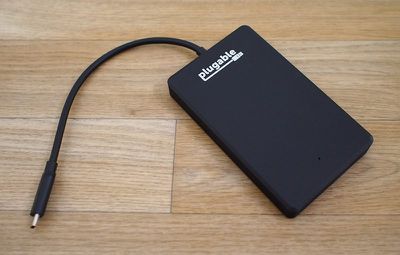 There's an integrated Thunderbolt 3 cable at the top, and a rather large and highly visible printed Pluable logo, which cheapens the look of the device just a bit. It's smaller than an iPhone X and similar in size to a deck of cards, so it's portable enough to stick in a bag or even a pocket if so desired.

As with most SSDs, your MacBook provides power to the SSD, so there's no extra power cable to deal with.

With continual usage, I've noticed that Plugable's SSD can get fairly warm, but that's not unusual and it does not appear to impact performance.

It's worth noting that the TBT3-NVME480 SSD comes with an 18-month warranty that can be extended to 36 months through registration, so if it fails during that time period, Plugable will replace it for you.

As mentioned above, Plugable says the TBT3-NVME480 SSD is able to reach maximum read speeds of 2400MB/s and maximum write speeds of 1200MB/s thanks to Thunderbolt 3 connectivity and its use of NVMe technology.

In Blackmagic disk speed tests with a 2016 MacBook Pro, my actual results varied a bit. With the test that uses 5GB file sizes to test transfer speeds, read speeds topped out at about 2025MB/s, while write speeds were just about at Plugable's promised 1200MB/s.

You should see faster transfer speeds near the maximum with smaller file sizes. In practice, it took just about three minutes to transfer a 57GB file from my MacBook Pro to the Plugable SSD. Comparatively, that same transfer with a standard hard drive took 17 minutes.

Transfer speeds will, in practice, differ based on the other peripherals you have plugged into your Mac and your Mac's workload.

Plugable's TBT3-NVME480 SSD is compatible only with Thunderbolt 3 machines, and it is not backwards compatible with Macs and Windows PCs that use USB-C or USB-A. That means you're not going to be able to plug this into an older machine to facilitate file transfers - it's exclusively for use with Thunderbolt 3.

For Apple's Macs, that means it works with the 2016 and 2017 MacBook Pro models, 2017 iMac models, and all iMac Pro models. macOS Sierra and later is required.

The SSD also works with Windows machines that support Thunderbolt 3 and have Windows 10, 8.1, or 7 installed. It is not compatible with Boot Camp Windows installations, unfortunately.

On Macs, the TBT3-NVME480 SSD works as soon as it's plugged into a free Thunderbolt 3 port (it's exFAT formatted), while on Windows, you'll need to go through an authentication process. Windows users will also need to make sure the latest TB3 and BIOS firmware updates are installed.

At $400 for 480GB of storage, the Plugable BT3-NVME480 SSD isn't cheap, but it's also not wildly unaffordable if you're aiming to find an SSD that's going to offer the fastest speeds you can get for tasks like large file transfers, booting an OS, or running a gaming library or photo library from an external drive.

You can get a 480GB SSD from Amazon for somewhere around $150, so the Plugable TB3 SSD is more than twice as expensive as other options, but it also offers twice the transfer speed. With a standard SSD, you're going to max out at about 450-500MB/s, so that extra $250 gets you more than twice the speed.

There are few Thunderbolt 3-compatible drives on the market right now, and most other options are 1TB+ and far more expensive, so it's nice that Plugable is offering a smaller, less expensive drive that's at least a little more accessible. On the downside, this storage solution is TB3 only and can't be used with non-TB3 machines, which is something to be aware of.

The average person doesn't need to shell out the extra money for the kind of transfer speeds offered by Plugable's new SSD, but for those who do need the fastest possible speeds, this is a storage option that's potentially worth checking out.

You can purchase Plugable's Thunderbolt 3 480GB NVME Solid State Drive from the Plugable website or from Amazon.com for $399.

Note: Plugable provided MacRumors with a TBT3-NVME480 SSD for the purpose of this review. No other compensation was received.

ignatius345
Maybe if this company is successful they can afford another G to spell "pluggable" correctly. Unless it's actually supposed to be pronounced "ploogable" as it is now.
Score: 3 Votes (Like | Disagree)

Stepping back, it’s still kind of mind blowing that you can put half a terabyte on the device the size of an iPhone. I remember my first hard drive was 80 MEGAbytes (and now I’m showing my age) which fit exactly under my Mac SE, so about 10x10”. And it cost about $1000.

Heh. Kabeyun, you are as ancient as I am!
Not playing one-upmanship with you but I upgraded my twin floppy Mac SE with a 20 Megabyte MiniScribe hard drive. I thought I would NEVER EVER fill that massive hard drive! And yes, that 20Mb hard drive cost an arm and a leg at that time as well.
Score: 1 Votes (Like | Disagree)

The article says no, but I I'm not sure why that should be the case. The drive seems to be capable of running on a lower bus speed given the explicit warning about using it on the lower throughput TB ports on MacBooks.

This is a source of gneral annoyance for me. I have a friend with a TB1 equipped iMac. They dont want to break the device open to replace the old magnetic disk, so hanging an SSD off of Thunderbolt would be awesome. Of course, just a few years later and nobody makes compatible drives.

The article isn't really explicit about whether it will work. It seems like the author is saying it won't because the port changed (true) but the TB2-to-TB3 is actually bidirectional and the TB3 standard is backwards compatible so unless there are wattage requirements it *should* work. There shouldn't even be that much speed loss running this over TB2 given that it isn't maxing out 40Gb/s of TB3... Honestly this USB-C/Thunderbolt thing is cool but very confusing even for someone like me who's grown up with this stuff.
Score: 1 Votes (Like | Disagree)

Maxed Out
Here is the ODM:

BlueTide
More stuff like this; I am waiting for external RAIDs with SSD blades for their size, speed and quietness. Would be grand to have more options for really fast and large working drives that would be silent.
Score: 1 Votes (Like | Disagree)
Read All Comments