With the launch of the Apple Watch Series 7, Apple introduced a new fast charging feature that allows the latest Apple Watch models to charge up to 33 percent faster than prior-generation models, but it requires new hardware. 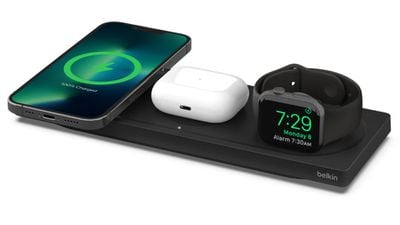 To take advantage of fast charging, Apple Watch Series 7 owners need an updated charging puck that supports the fast charge feature, which means all existing chargers from both Apple and third-party companies are out of date and won't offer the fastest charging speeds when paired with a Series 7. To address this, Belkin in November launched the Boost Charge Pro 3-in-1 Wireless Charging Pad with MagSafe, which is equipped with a new fast charge Apple Watch puck.

For some time, Belkin's multi-device chargers have featured an upright charging position for the iPhone with other devices accommodated below or at the other side, but this new model is flat.

On the right, there's an Apple Watch charging puck that can be used flat or popped up for Night Stand mode, along with a flat MagSafe charging pad on the left. In the middle, there's a circular indent where the AirPods are meant to be positioned.

In terms of the amount of desk space that this design takes up, I'm not a fan. My iPhone 13 Pro Max needs to be positioned in a portrait orientation to charge, so there needs to be space both above the charger and below the charger to fit the phone. With an upright charging pad design, the ‌iPhone‌ is up out of the way and the charging pad can go at the back of my desk (which is up against the wall), but with this flat design, it needs to be more in the middle of my desk to have room for the ‌iPhone‌.

With all three charging spots in a row, the Boost Charge Pro measures in at nine inches long and a little over three inches wide. That size won't matter on a good sized desk with a lot of room, but if you have a smaller, more compact space like I do, this design might not be ideal. Belkin says that this design is meant to be more packable, but it's too thick and heavy for that purpose, in my opinion.

In terms of build quality, the Boost Charge Pro Wireless Charging Pad has a premium feel with a solid weight that keeps it on the desk when using the ‌MagSafe‌ charger with an ‌iPhone‌, and it's made from a soft touch material that comes in either black or white. The Apple Watch charging puck and ‌MagSafe‌ charger are white, and there are chrome accents for both. As you might notice in my photos, with the black model, it picks up lint and dust, and it's difficult to get off because of the texture.

There's an LED light on the charger for the AirPods charging spot, but Belkin relies on the Apple Watch and ‌iPhone‌ screens to confirm charging for the other devices because they're both magnetic chargers with more simple alignment.

Though designed for ‌MagSafe‌ iPhones and the latest Apple Watch, the Boost Charge Pro is compatible older iPhones and Apple Watch models. You won't get faster charging speeds with an older Apple Watch and with the ‌MagSafe‌ charger, non-MagSafe iPhones will max out at 7.5W, but it works. You can also squeeze another ‌iPhone‌ into that middle charging spot too.

Belkin ships the Boost Charge Pro with a power adapter that has a barrel plug rather than something more universal like USB-C, but that's typical of these 3-in-1 Belkin chargers. I do wish Belkin would adopt USB-C, and I also wish we could get more variance in naming to keep the different charging options straight.

If you have the budget and the desk space for the Boost Charge Pro 3-in-1 Wireless Charging Pad, it's potentially worth picking up to get the fastest wireless charging speeds for the newest ‌iPhone‌ and the Apple Watch.

Most people can get by with older, slower charging options, but the Boost Charge Pro may be of particular interest to Apple Watch Series 7 users who wear their Apple Watches to bed. Faster charging can be a real quality of life improvement if you want to get to sleep but need to charge up your Apple Watch to have enough juice to get through the night.

Just about 10 minutes of charging provides sufficient battery life for an eight hour sleeping period, which is convenient. Of course, there is the option of the charging puck that came with the Apple Watch, but for those who prefer a single-cable charging solution and want fast charging, the Boost Charge Pro is the only available option right now.

The Boost Charge Pro 3-in-1 Wireless Charging Pad can be pre-ordered from the Belkin website for $150. It will ship in December or January.

Note: Belkin provided MacRumors with a 3-in-1 Wireless Charging Pad for the purpose of this review. No other compensation was received. MacRumors is an affiliate partner with Belkin. When you click a link and make a purchase, we may receive a small payment, which helps us keep the site running.

JoEw
I wish these things were half the price, $150 is a lot to stomach for a charger.
Score: 11 Votes (Like | Disagree)

There are plenty of $30-40 options on Amazon that do the exact same thing. I have one from MAKAQI and it's perfect. This is a stupid waste of money.

I wish these things were half the price, $150 is a lot to stomach for a charger.

When I still owned a watch I never ran into a situation where I needed it charged rapidly. I fear new watch owners would be suckered into spending so much on this, in the three years I owned one I always would rather my iPhone or 12.9" iPad charge faster, watch wasn't even a thought.

Yeah me too, until I started to track my sleep. Before, my watch was charging overnight so I never had the need to fast charge. Now I wear my watch like 23h a day, and fast charging is much more convenient to give a boost when needed if you keep it on you all the time.
Score: 4 Votes (Like | Disagree)

100% agree. Last years model was much better. It has a small, round circular base with a “T” coming out of it. The watch goes on one side and the other side has a MagSafe charger. They still sell that model I believe. I’ve got two of them and the quality seems very top notch to me. 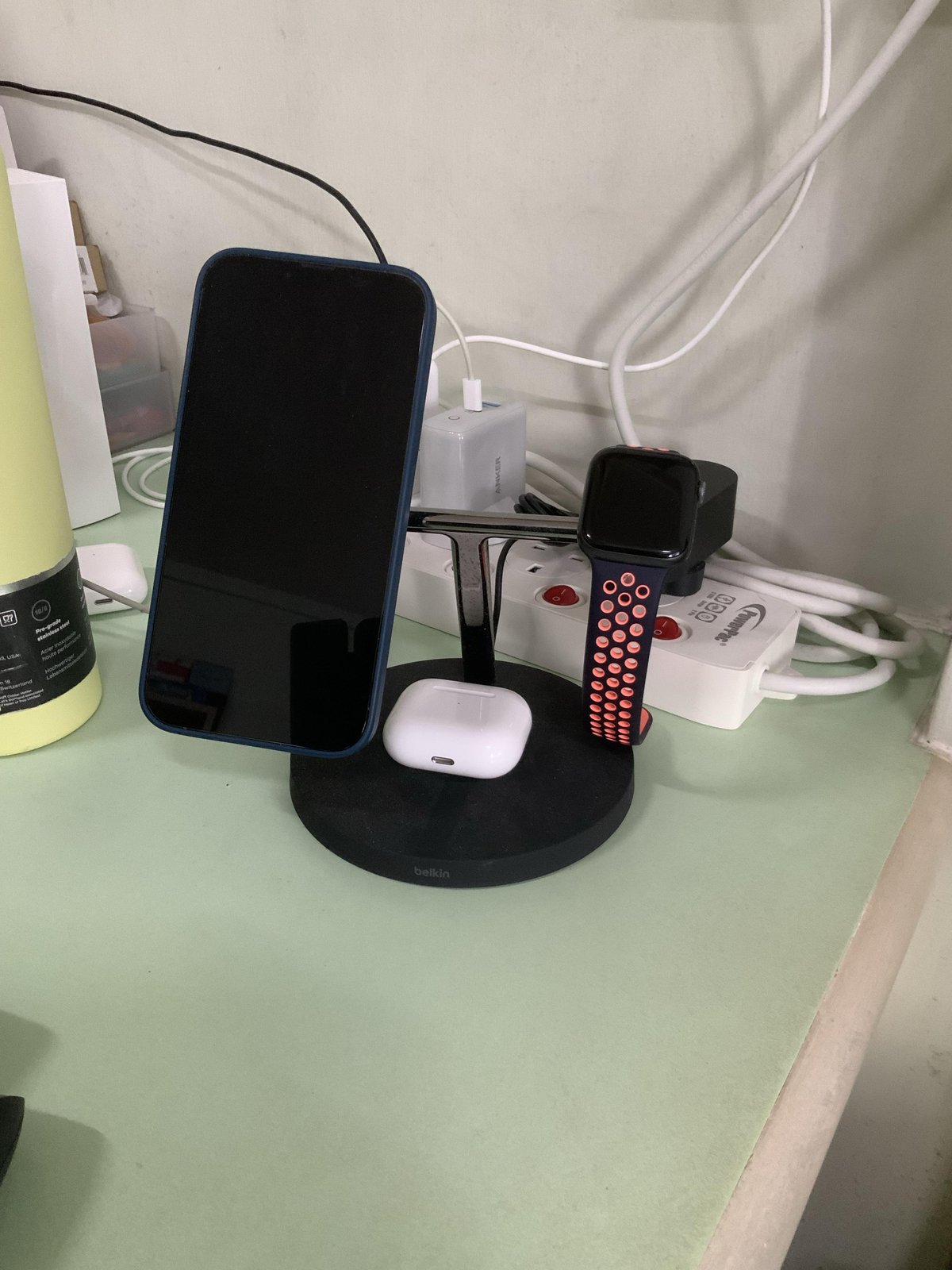 You mean this one? I also like it because it leverages on the strengths of magsafe by essentially suspending the iphone in mid-air. If I am going to be resting my phone flat on a charging slab, who cares whether it’s magnetised or not?
Score: 4 Votes (Like | Disagree)

gk4
I dont get anyone not using a USB C for this stuff. Same goes for Apples MagSafe DUO.

If they used USB C, this could also be used to charge your iPad by removing the USB C cable from the dock and plugging it into your iPad. Or a Mac. Crazy that they could so easily minimize the number of cables you need to bring with you when travelling, but they don't.

Especially for Apple, I'd think the desire to minimize the impact of their decisions to have multiple different charging methods across their product lines would be a priority.
Score: 4 Votes (Like | Disagree)
Read All Comments