With a new material called Gallium nitride (GaN), semiconductor components have been able to be shrunk down, leading to smaller than ever charging accessories. Several accessory makers have been taking advantage of GaN technology for new products, including Anker.

Anker recently debuted the PowerPort Atom PD 1, a 30W USB-C charger that's much smaller than the USB-C power adapters offered by Apple and, in fact, not much larger than an iPhone charger. 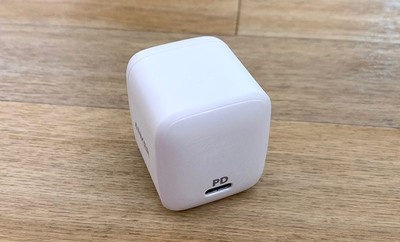 The Atom measures in at 1.4 inches wide and 1.5 inches tall, which is about 40 percent smaller than the similar 29/30W USB-C chargers that ship with the MacBook and MacBook Air.

Design wise, there's not a whole lot to say about the Atom. It's a small white charger that's almost cube shaped, with a shiny face and a single USB-C port that has "PD" written above it to denote its status as a USB-C PD power adapter. At the side, there's an Anker logo.

The plug at the back is not collapsible, likely due to its small size, which is one minor negative. It doesn't fold down, so the prongs are always going to be sticking out.

The small size of the Atom is convenient because when you plug it in to an outlet or a power strip, it doesn't take up unnecessary space. In my case, I have a power strip in a cable organizing box, and power adapter size can be a real concern in this kind of situation.

A smaller power adapter doesn't take up more than one outlet, and it can be placed in either the top or bottom slots. It's also not in the way with a power strip, and it's more versatile than Apple's own power adapters.

As a 30W USB-C power adapter, the Atom is ideal for charging the USB-C enabled iPad Pro models, the MacBook, and the ‌MacBook Air‌. It's not powerful enough for the 13 and 15-inch MacBook Pro models, but for all smaller devices, it's perfect.

Atom next to 29W USB-C MacBook power adapter
On the 2018 USB-C ‌iPad Pro‌ models, you're going to see faster charging with a USB-C to USB-C cable than you do with Apple's standard 18W power adapter.

I was able to test out the cables, which will be available in two varieties -- the Powerline II and the Powerline+. Anker's cables will come in three and six-foot lengths.

Powerline+ is the premium version of the cable, covered in a durable and attractive braided nylon material. The version I have on hand is red, and it's a nice looking cable. Pricing for this cable hasn't yet been announced, but the standard Powerline II will be priced at $15.99.

I haven't been able to use it for a long period of time to test durability, but Anker's cables are known for being well made. It certainly feels sturdy, and the USB-C and Lightning connectors at the ends are protected with a thick rubber material and an aluminum cap that prevents flexing at vulnerable points.

PowerLine+ Lightning to USB-C cable
It's usually the ends of cables where fraying happens, so the protection Anker has added should keep the Powerline+ from breaking with frequent use.

The Powerline II cable is similar to the Powerline+, but it doesn't have the nylon covering. It's made from the same material as any other standard Apple cable.

PowerLine II Lightning to USB-C cable
The connector ends are protected with a rubber material, but there's no aluminum end for added durability. Still, the thick rubber material that extends past the joint where the cable attaches to the connector is more protection than a standard Apple USB-C to Lightning cable offers, and it too should hold up well.

If you need a USB-C power adapter for the purpose of fast charging an ‌iPhone‌ or as a secondary charger for an ‌iPad Pro‌, MacBook, or ‌MacBook Air‌, the Atom is an ideal choice. It's small, compact, and affordable, priced $15 less than Apple's 30W Power Adapter.

Most USB-C PD chargers from established companies on Amazon are priced in the neighborhood of $25 to $30 anyway, so the Atom is competitively priced and shelling out a few extra dollars for portability and convenience seems well worth it.

You can purchase the PowerPort Atom PD 1 from Amazon for $30, and it is expected to be back in stock later today or tomorrow. The first of Anker's USB-C to Lightning cables will be launching in February, and the Powerline II is available for pre-order on Anker's site for $15.99.

Note: MacRumors is an affiliate partner Amazon. When you click a link and make a purchase, we may receive a small payment, which helps us keep the site running.

Is fast charging an iPhone with this PowerPort Atom PD 1bad for the battery? Device looks good. I'm tempted.

The iPhone controls how fast it charges. It will throttle charging as it gets closer to full. From what I've heard listening to tech podcasts, you might shave a week or two off the battery life by fast charging and leaving it charge overnight, but that is about it.

An example I've heard was this: Imagine you and all your friends are going to cram into a car. The first 4 people can all jump in at the same time. The next few can get in pretty easy too. By the time you shove numbers 10, 11, and 12 in, it gets kind of hard. Your batteries are like that. When empty, they charge pretty quick. That last 5-10% you really have to cram in. That's why some suggestions are to run your battery down to 25%, then charge up to about 75%. Keeps it in the "fairly easy" range.
Score: 5 Votes (Like | Disagree)

UltimaKilo
Here’s hoping Apple catches up and starts making this standard in the 2018 iPhones.
Score: 3 Votes (Like | Disagree)

iSayuSay
Lightning port really is the annoying problem in this situation, the Macbook and iPad Pro has been using the same cable, but this one particular iPhone requires me to bring another extra cable, just for the iPhone! Am I in the same ecosystem or what? LOL
Score: 2 Votes (Like | Disagree)

B-Mc-C
Considering the prongs are not retractable, it doesn’t seem to save much space over the Apple chargers.
Score: 2 Votes (Like | Disagree)

Considering the prongs are not retractable, it doesn’t seem to save much space over the Apple chargers.

The iPhone controls how fast it charges. It will throttle charging as it gets closer to full. From what I've heard listening to tech podcasts, you might shave a week or two off the battery life by fast charging and leaving it charge overnight, but that is about it.

An example I've heard was this: Imagine you and all your friends are going to cram into a car. The first 4 people can all jump in at the same time. The next few can get in pretty easy too. By the time you shove numbers 10, 11, and 12 in, it gets kind of hard. Your batteries are like that. When empty, they charge pretty quick. That last 5-10% you really have to cram in. That's why some suggestions are to run your battery down to 25%, then charge up to about 75%. Keeps it in the "fairly easy" range.

Thanks -- clearest breakdown I've read yet on why this is so!
Score: 2 Votes (Like | Disagree)
Read All Comments

Saturday August 8, 2020 11:09 am PDT by Hartley Charlton
Apple is taking legal action against the developers of the app "Prepear" due to its logo, according to iPhone in Canada. Prepear is an app that helps users discover recipes, plan meals, make lists, and arrange grocery deliveries. The app is a spinoff of "Super Healthy Kids," and the founders claim that they are facing litigation from Apple. Apple reportedly takes issue with Prepear's logo, ...
Read Full Article • 520 comments

Thursday August 6, 2020 10:05 am PDT by Juli Clover
Apple today seeded new public betas of upcoming iOS 14 and iPadOS 14 updates to its public beta testing group. Today's software releases, which Apple labels as fourth betas to keep them in line with developer betas, are actually the third betas that Apple has provided and they come two weeks after the prior beta releases. Public beta testers who have signed up for Apple's beta testing...
Read Full Article • 97 comments