Apple in iOS 11 revamped the iPad's interface and changed the way we interact with the tablet through a new Dock, a revamped App Switcher, and Drag and Drop, and with iOS 12, further iPad changes have been implemented.

There are new gestures to learn for accessing the Home screen, App Switcher, and the Control Center, along with a new status bar.

Subscribe to the MacRumors YouTube channel for more videos.
The new iPad gestures are identical to the gestures on the iPhone XS, with Apple preparing us for the elimination of the Home button in future iPad models. Rumors suggest upcoming iPad Pro models will feature a TrueDepth camera system and Face ID rather than a traditional Touch ID Home button.

If you use an iPhone X, XS, or XR, the new iPad gestures will be familiar to you, but if you don't, it could take a bit of time to get used to.

Dock Changes: Getting to the Home Screen and App Switcher

In iOS 11, when you wanted to access the Home screen from within an app, you would press the Touch ID Home button. That's still true, but you can also now get to the Home screen when you swipe up from the bottom of the display, as demoed in the video above.

When in an app, swiping up from the bottom of the screen takes you right to the Home screen rather than just bringing up the iPad Dock within an app. 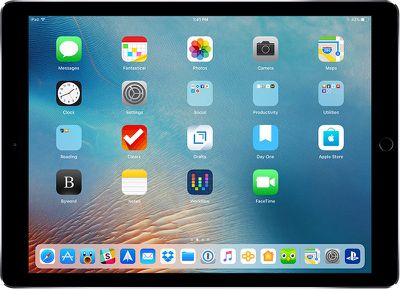 The iPad's Home screen. Get here with one quick swipe on the Dock.
To get to the Dock to open more than one app for multitasking purposes, you need to do a swipe and a slight hold hold rather than just a swipe at the bottom inch of the screen while you have an app open already.

The iPad Dock in an app. A quick swipe brings you to the Home screen, but a swipe and a hold brings up the Dock in an app.
If you swipe and hold a bit higher on the screen, you can access the App Switcher on the iPad for quickly swapping between apps or closing apps, which is done with a swipe upwards on an app card. This gesture works both within apps and at the Home screen.

The iOS 12 iPad App Switcher, accessible with a longer swipe and hold on the Dock, either at the Home screen or within an app.

Getting to Control Center

Getting to Control Center is now done by swiping downwards from the right portion of the status bar, where it displays your battery life and Wi-Fi/Cellular connection.

All other gestures on the iPad remain the same, such as a swipe downwards from the top middle of the display to bring up your notifications and a swipe to the right to get to the Today section for widget access, but there are other iPad improvements worth noting in iOS 12.

The iPad's status bar has been redesigned in iOS 12, and it now resembles the status bar of the iPhone XS. The date and time are listed on the left hand side of the status bar, while battery life and Wi-Fi/Cellular signal and connection are displayed on the right hand side.

The middle of the display, where the date was previously shown, is left open, perhaps for a future notch. Prior to iOS 12, the iPad's status bar did not show the date, so that's also a new addition.

When typing on the iPad, if you press and hold with one finger on the space bar, it turns the keyboard into a trackpad to make it easier to navigate through a document and move the cursor.

This is a feature that has been available on iPhones with 3D Touch and on the iPad with two fingers, but in iOS 12, it's simpler to use. A two finger touch also continues to work.

All of these gestures are actually pretty intuitive…

You guys keep using that word, but it does not mean what you think it does.

"Intuitive" is something when you can grasp it without having to actually put in any thought about it. You get it simply by intuition, without the need for an explanation.

Tapping an icon on a screen with the finger is intuitive. Scrolling the screen content by pushing it in the direction you want it move is intuitive. Enlarging or shrinking something on screen by dragging its corners outwards or pinching them together is intuitive. Even using the home button to get back to the home screen is somewhat intuitive as you can understand it with a single exploratory press on the single large, conspicuous button on the front of the device.

These things might be easy to learn, but nothing of this is anything you would automatically do out of a purely intuition based expectation about how things work.
[doublepost=1530347008][/doublepost]

I’m so glad the gestures have changed to match iPhone X. Going back and forth from my iPhone X to iPad Pro is always a bit annoying. No more!

So now it's annoying for anyone going back and forth between an iPad and any other iPhone. But hey, good for you.
Score: 15 Votes (Like | Disagree)

<snip>
Edit: All of these gestures are actually pretty intuitive and simple, so if anything it's an improvement. But it is a bit of an adjustment to swipe to exit out of an app.

Maybe these gestures feel intuitive if you frequently use the darn thing. For casual users or actual newbies it becomes horrible very quickly. :(

Try to hand an iPad to somebody who has never used one and the person will be utterly lost. Things will feel pretty random to them. I have an original iPad with IOS 5 somewhere in the house. You could give this to a toddler and it would be able to make sense of it.
Score: 5 Votes (Like | Disagree)

JosephAW
My friend with Parkinson's really struggles with all these swipe and press swipe gestutures. Fortunately he can still operate the home button most of the time. I feel sorry for those who will not have a home button on future devices.
Score: 5 Votes (Like | Disagree)

pat500000
These days ios are cluttery mess with complexity.
Score: 5 Votes (Like | Disagree)

quietstormSD
I don't think they should have the same gestures on all iPads. For iPads with a home button, they should keep the iOS 11 gestures, and for the upcoming iPad with no home button use the iPhone X gestures.
Score: 4 Votes (Like | Disagree)

So how do I easily get to the control center from any app, so I can change the brightness, then return to the app?

I used to be able to just double click on the home button, change the brightness, then click the app.

You can swipe from the right in an app, so you don't need to go to the Home screen first. Then you just swipe back up to close it. Same as iPhone X.

Edit: All of these gestures are actually pretty intuitive and simple, so if anything it's an improvement. But it is a bit of an adjustment to swipe to exit out of an app.
Score: 4 Votes (Like | Disagree)
Read All Comments

20 hours ago by Joe Rossignol