Flight tracker apps are a popular way to keep tabs on planes in the sky, because when you're preparing to fly or when someone you know is on board a flight, you can use them to check that things are still on schedule. But if you have an iPhone, you don't need to download and install a third-party app to track a flight – it's a handy built-in feature of the operating system. 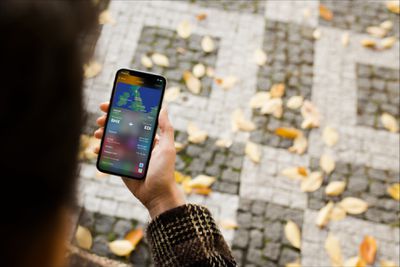 The ability to track flights in iOS is thanks to the data detectors that Apple has integrated into the system for quite a few years now. Data detectors recognize things like times, dates and addresses, and in the right context, turns these into tappable links. Here's how it works.

If someone sends you a flight number (U2502, say) in Messages, you should be able to tap the underlined number to get a real-time view of the flight's progress plotted on a map.

You also get the option to learn more by tapping Preview Flight, which will give you information like departure and arrival times, delays, and for some airports, baggage claim details. You'll find links to the airline website and Apple Maps at the bottom of the information card.

To increase the chances that iOS detects the flight number, it's best to include the full airline name along with the number (EasyJet U2502, for example).

On ‌iPhone‌ and iPad, you can also track flights in Search.

Swipe down from the middle of the Home screen and simply input the flight number into the search field to get departure and arrival information. Tap the information card to get the additional details mentioned above.

Tracking Flights on a Mac

Apple has included the same data detectors into macOS, meaning you can track flights on your Mac, too. Simply invoke Spotlight with the Command-Spacebar key combination and type the flight number into the input field.

Select the flight data in the results, and you'll see the same information card that appears in iOS, complete with the flight's live trajectory shown on a map and other details.

How to Force Quit a Frozen Mac App

Wednesday January 19, 2022 3:20 pm PST by Tim Hardwick
Macs aren't infallible, and at some point during your time using them you'll come across a situation in macOS where an app has become unresponsive, leaving you without access to its contents and functions, and only a continually revolving beachball for your troubles. If the beachball stays on the screen for more than a few minutes and you can't interact with the app's interface, this usually ...
Read Full Article

iOS 15: How to Filter Search Results in Maps

Thursday July 29, 2021 4:35 pm PDT by Tim Hardwick
In iOS 15, Apple has worked to improve the search results in its Maps app, and has added the ability to filter results by options like what specific cuisine you're looking for, whether a restaurant is open or offers takeout, and more. In the following steps, we've demonstrated how it works by looking for restaurants that serve a particular type of cuisine, but you can filter other...
Read Full Article

iOS 15: How to Set Leaving and Arrival Times for Driving Directions in Apple Maps

Wednesday July 7, 2021 3:05 pm PDT by Tim Hardwick
Apple Maps received several notable improvements in iOS 15, including new details in cities, an interactive globe, and enhanced driving directions. It also gained a feature that has long been available in rival map apps – the ability to set leaving and arrival times for driving directions. This is a feature that's long been available for Google Maps, and one that's really useful if you...
Read Full Article • 24 comments

macOS: How to Prevent Emails From Tracking You in the Mail App

Thursday December 9, 2021 8:10 pm PST by Tim Hardwick
In macOS Monterey, Apple introduced a new email privacy feature called Mail Privacy Protection, which prevents companies and advertisers from tracking how you interact with their emails. This article explains the feature and how you can control it. Apple's App Tracking Transparency feature is designed to allow users to opt out of the surreptitious tracking that third-party apps have...
Read Full Article