macOS Sierra: How to Use Apple Pay on the Web

macOS Sierra and iOS 10 both include a new Continuity feature that allows Apple Pay to be used to make purchases on the web using Safari, giving Apple users an alternative to other web-based payment services like PayPal.

On Macs, Apple Pay for the web requires an iPhone with Touch ID and Apple Pay support or an Apple Watch, as payments are authenticated through the phone or watch. Apple Pay on the web requires merchants to adopt Apple Pay, so it isn't yet available everywhere, but support has started rolling out. 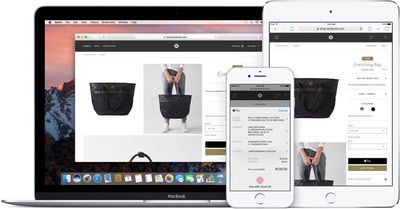 Sites like Time Inc., Wayfair, and Apple's own online Apple Store have started accepting Apple Pay, and payment processors like Stripe, Big Commerce, Shopify, and Squarespace all offer support, so it may be almost everywhere in just a couple of months.

Here's how it works:

When checking out on the web, all payment and shipping information is entered automatically, so you don't need to do anything but tap the confirm button to pay. It's quick, simple, fast, and safe. There is, however, a popup that will let you select the card you want to use, choose the shipping address, and more, if you need to make alterations.

Apple Pay on the web is a Continuity feature so it requires a Mac with Bluetooth 4.0 support. It is compatible with the following machines running macOS Sierra:

Apple Pay also requires an iPhone 6 or later running iOS 10 or an Apple Watch with watchOS 3, and it only works with the Safari browser. Apple Pay on the web is also available on iOS devices and will be available as long as one card has been added to the Wallet app on the iPhone.

Not sure this is appealing to me. It seems like more work. Is it just because it's more secure?

It also allows you to make purchases online without giving your credit card information.
Score: 5 Votes (Like | Disagree)

garirry
I'm curious though, when the MacBook Pro will be released, if it'll have a fingerprint scanner, would you be able to add Apple Pay directly to macOS and pay without an iPhone? Alternatively, you may be able to use your phone's Apple Pay info but by authenticating through the MBP's touch ID.

Not sure this is appealing to me. It seems like more work. Is it just because it's more secure?

Oh trust me it just seems difficult. Click "pay by apple pay" and a prompt pops up on your watch or iPhone. It's definitely not difficult.
Score: 2 Votes (Like | Disagree)

That's what the continuity hack solves
Score: 2 Votes (Like | Disagree)

marine0816
So I have to run upstairs to get my iPhone to pay for something? I do the same with my wallet
Score: 1 Votes (Like | Disagree)

Nunyabinez
Not sure this is appealing to me. It seems like more work. Is it just because it's more secure?
Score: 1 Votes (Like | Disagree)
Read All Comments

8 hours ago by Juli Clover