How to Access and Set Up Parental Controls in iOS 12

With Screen Time, Apple has introduced a robust set of parental control options in iOS 12, giving parents a way to monitor and limit the amount of time children are spending on their iOS devices, within specific apps, and more.

You'll need to turn on and set up Screen Time on all devices owned and used by your children, which is done in the Screen Time section of the Settings app. 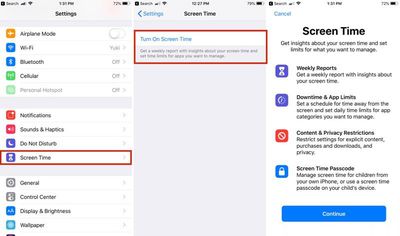 Here's how to do it:

From here, you can choose to set Downtime, which is a set period of time in which your child will be allowed or disallowed from using the iPhone, or App Limits, which will restrict certain app categories. At setup, you can also choose Content and Privacy settings, which are further explained below.

If you want to change Downtime and App Limits selections for your child, you will be able to do so at any time by going to the Settings app and selecting Screen Time on the child's device.

All of your App Limits, Downtime, and Content Restrictions are protected via a passcode that must be entered to grant more usage time to children when limits have been reached. This also prevents children from changing their own Screen Time settings.

Downtime sets a schedule that allows you to choose when your child can and cannot use their iPhone or iPad. You can, for example, choose to restrict access to iOS devices from 10:00 p.m. at bedtime until 7:00 a.m. in the morning, or choose something that limits hours even further, such as during school.

With Downtime, you can opt to block the device at Downtime, which prevents apps from being used entirely sans parental permission or choose for a less restrictive feature that allows children to turn off Downtime themselves or get 15 more minutes of usage before another reminder about Downtime restrictions.

Downtime and App Limits with blocking turned on at left and blocking turned off at right
Most parents will likely want to turn on blocking for Downtime to prevent apps from being used entirely, but the non-blocking option is useful for more responsible children where all parents want to do is offer up a reminder that apps shouldn't be used at certain times.

During Downtime, all apps on the iPhone are grayed out with little hourglass locks on them, letting children know that time limits have been reached. The exception is certain apps that are always allowed in case of emergency, such as the phone.

App Limits allow you to finely control how much time your kids spend using certain categories of apps.

So, for example, if you want to limit the amount of time a child is spending on Snapchat and mobile games, you can set an App Limit for those categories for an hour or two.

After the App Limit has been reached, children won't be able to further access those app categories without asking for express parental permission. Apps will be locked with an hourglass symbol and a passcode will be required to enable more time.

As with Downtime, you can set less restrictive rules that serve as more of a reminder by turning off blocking with App Limits.

By default, Apple marks Phone, Messages, FaceTime, and Maps as always available apps, but you can select any apps that you want through the Always Allowed app interface, accessible under "Always Allowed" in the Screen Time section of Settings on a child's device.

You can also remove access to all apps, including Messages, with the exception of the phone, which remains available to children in case of emergency.

Always Allowed is ideal if you want your kids to be able to use certain educational or communication apps at anytime while leaving other apps inaccessible.

Apple has always offered Content Restrictions for parents to limit access to music, movies, TV shows, and apps that are inappropriate for younger children, but these parental controls now live under the Screen Time section of the Settings app alongside the other Screen Time options.

You can also set privacy settings for everything from location to advertising preferences, so, for example, if you wanted to make sure you can always access your child's location, you can turn on Location Services and select Share My Location.

There are even options that prevent children from changing the passcode on their device, restrict account changes, limit volume, and automatically turn on Do Not Disturb While Driving.

rjohnstone
Loaded iOS 12 beta on my daughter's iPod to try this out .
She hates me now. My job is done. :p
Score: 3 Votes (Like | Disagree)

This is a major security backdoor which totally invalidates the feature in its entirety and the bug is present in the most recent Beta 6 (public beta 5) build.

I have submitted a bug report to Apple a few days ago, but it was not addressed in today’s new build yet.
Score: 2 Votes (Like | Disagree)

m0sher
As a parent this is a great tool that should’ve been included with phones long time ago based on how volatile the net can be for children.

Unfortunately for me, it’s a little too late, my youngest is 18 years old. :)
Score: 2 Votes (Like | Disagree)

Master of Tragedy
Nice feature but my kids found a simple way to prevent this.
They edited their birthdate in their iCloud-Accounts. From 13 to 18 and from 14 to 18.
Now I can't do anything about that as only they can login and change it. Why is it even possible that minor family members can change their birth dates?
Score: 1 Votes (Like | Disagree)

But still no way for parents to set a maximum allowed system sound volume.

(Which happens to be the only parental control feature I need.)

now i see it
I don't see this going down well. Once the kid sees a friend's iPhone/iPad that's unrestricted— there's going to be some splainin to do back home.
Score: 1 Votes (Like | Disagree)
Read All Comments

16 minutes ago by Tim Hardwick

iOS 16: How to Change the Lock Screen Clock to Devanagari

16 minutes ago by Tim Hardwick

iOS 16: How to Add Widgets to Your iPhone Lock Screen

17 minutes ago by Tim Hardwick