In macOS Catalina, it seems whether or not you own a MacBook with a Touch Bar, Apple still wants you to be able to access those virtual controls, even if that means putting them right on the screen. 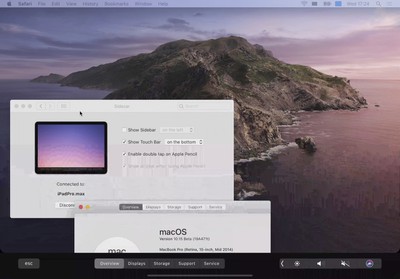 Image credit: Reddit user dotmax
Apple's new Sidecar app lets you connect an iPad to your Mac for extra screen space. It works both wired and wirelessly, and supports the Apple Pencil as an input device for the Mac.

And for Mac apps with Touch Bar support, the controls appear at the bottom of your ‌iPad‌ screen — even if your Mac doesn't have a Touch Bar.

In other words, the ‌iPad‌ Touch Bar mirrors the MacBook Pro's Touch Bar on a model with a Touch Bar, and when used with a MacBook Pro that doesn't have a Touch Bar, it lets you tap into functionality that would otherwise be unavailable.

The implementation will be familiar to users of Duet Display, which was first to offer Touch Bar support on a connected tablet's screen.

Since its introduction, the Touch Bar has divided users – some find the functionality useful, while others prefer their MacBook Pro to have a full set of physical function keys instead.

The touchbar is obnoxious for users, who would prefer an actual touch screen and physical function keys, and for developers who have better things to do than support the touchbar for the small percentage of users who have them. At the very least apple should make real function keys an option on all configs of the MacBook Pro, not just the wimpy one with inadequate cooling and slower WiFi.

This is a wild guess but I can actually see this being Apple’s “soft landing” for the Touchbar apps. If it is going to get discontinued, Apple can say: “well, these are still useful they just live in sidecar now.

However, I suspect if this becomes the case it will end up only marginally supported and eventually die completely.
Score: 5 Votes (Like | Disagree)

aaronhead14
This is a better implementation of Touch Bar than the actual Touch Bar on MacBooks. Lol.
Score: 4 Votes (Like | Disagree)

Since its introduction, the Touch Bar has divided users - some find the functionality useful, while others prefer their MacBook Pro to have a full set of physical function keys instead.

The touchbar is obnoxious for users, who would prefer an actual touch screen and physical function keys, and for developers who have better things to do than support the touchbar for the small percentage of users who have them. At the very least apple should make real function keys an option on all configs of the MacBook Pro, not just the wimpy one with inadequate cooling and slower WiFi.
Score: 4 Votes (Like | Disagree)

TechGod
Apple really knocked it out of the park this time.
Score: 3 Votes (Like | Disagree)

SnarkyBear
I wonder which iPads it will work with. Will my old first gen iPad mini finally have a new life as a side screen for my iMac??
Score: 2 Votes (Like | Disagree)
Read All Comments

Thursday March 4, 2021 8:37 pm PST by Eric Slivka
Earlier today, DigiTimes shared a preview of an upcoming report claiming that Apple is working on both iPad and Mac notebook models with OLED displays that could launch starting in 2022. The full report from DigiTimes is now available, and it includes several new alleged details about Apple's plans. According to the report, the first of these devices to adopt an OLED display is likely to be...
Read Full Article • 91 comments