Caviar, a Russian company known for creating extravagant and expensive replacement casings for iPhones, has revealed a new customized iPhone 12 Pro that uses a fragment of the original Apple I's circuitry. 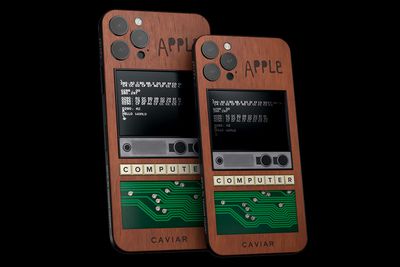 The custom ‌iPhone 12‌ Pro is styled as a homage to the original Apple I, which was the first computer to be made by Apple. The custom casing features a back panel made of wood that resembles that used on the Apple I, a glossy titanium miniature monitor and keyboard buttons, Apple lettering in the style of the original, and most importantly, an exclusive fragment of the Apple I's circuitry.

Only 63 Apple I computers have been confirmed to still exist, and they have been known to fetch around $400,000 at auction. One of these has been cut up into pieces to make the Caviar Apple I ‌iPhone 12‌ Pro.

The Apple I was released in 1976. Each was hand-built by Apple co-founder Steve Wozniak. The computer was unique because, unlike other machines sold at the time, all users required was a keyboard and a television set to use it. Many of the originals were destroyed by Apple when users traded them in for Apple IIs, contributing to their rarity today.

Only nine copies of the custom ‌iPhone 12‌ Pro will be created, and there is a variant for the iPhone 12 Pro Max, with options available for storage. Prices start at $9,990 for the base configuration.

Yesterday, Caviar launched a custom iPhone 12 Pro in the style of the iPhone 4, with a fragment of Steve Jobs' famous turtleneck embedded in the Apple logo.

Update: A new video from YouTube channel Computer Clan has made the case that the Caviar Apple I ‌iPhone 12‌ Pro uses a fake piece of an Apple I computer, contrary to what Caviar advertises.

Raising the question of "why would you destroy such a rare and valuable piece of computer history just to make an ‌iPhone‌ case," the video highlights Caviar's pricing inconsistency for the Apple I themed-iPhone 12 Pro. This is because the value of an Apple I motherboard far surpasses the cost of the nine Caviar iPhones that are going on sale, meaning that each would have to be sold at a major loss.

Caviar's product photos, which appear to be GCI renderings, are also inconsistent between Caviar's video and its webpage.

The photo of the Apple I board on the Caviar website has no components soldered to it, which is extremely unusual. Some of the images were also found to be an edited copy of a picture of a replica Apple I motherboard from eBay.

Computer Clan has set out its intention to investigate further by attempting to obtain a piece of the Apple I computer from Caviar to verify its authenticity.

Tommo66
Seriously if you buy one of these you genuinely have more money than sense. It looks awful.
Score: 36 Votes (Like | Disagree)

cjbriare
I'd rather have the Apple I
Score: 16 Votes (Like | Disagree)

vicsondi
Damn! Looks like something a second grader created. Just astoundingly unaesthetic, and not in a retro homebrew way. I mean, little scrabble letters that look like stickers from a hobby store and spell out “computer”? Surely they can’t be serious.

What a waste of a good circuit board. I would pay $10,000 to get a visual restraining order against this product so that I never risk seeing one again
Score: 16 Votes (Like | Disagree)

AngerDanger
Had to double take because I thought I was looking at a real Apple One for a second there…
Score: 13 Votes (Like | Disagree)

Pupi
A fool and his money. Whoever buys this tacky crap deserves their money taken away.
Score: 11 Votes (Like | Disagree)
Read All Comments