Support for the Apple Pencil was one of the major differentiating factors between the fifth-generation iPad and the 10.5-inch iPad Pro, with Apple Pencil connectivity limited to Apple's more expensive flagship tablets.

Now that Apple Pencil support has been built into the sixth-generation iPad, which costs just $329, the Apple Pencil is far more accessible and there's less separating Apple's cheapest tablet from its priciest models. In the video and post below, we go over all of the differences between the new iPad and the existing iPad Pro.

Subscribe to the MacRumors YouTube channel for more videos.
The iPad Pro and the sixth-generation iPad may seem similar at first glance due to the shared Apple Pencil support, but the iPad Pro continues to offer a faster processor, better cameras, and a better display to justify its high price tag.

Apple's iPad Pro, for example, uses ProMotion technology with a 120Hz refresh rate, which makes all motion on the screen smoother, crisper, and more responsive.

It's dramatically different than other iPad displays with smoother text, better gameplay, and enhanced videos. True Tone technology, which adjusts the white balance of the display to match the ambient lighting is also an iPad Pro-only feature, as is wide color, for brighter, more vivid colors.

The sixth-generation iPad, meanwhile, uses the same non-laminated display that was first used in the iPad Air, albeit with improvements to make it brighter and a new touch sensor to allow for Apple Pencil support. It's Retina, but otherwise unremarkable.

The iPad Pro is also using an A10X Fusion chip, new in 2017, while the iPad is equipped with the A10 Fusion from the 2016 iPhone 7 and iPhone 7 Plus. Major improvements have been made in processor and GPU speed in recent iterations, so the iPad Pro is going to be a good bit faster than the iPad, though you're not going to notice in everyday tasks.

If camera quality is of importance, the iPad Pro has the latest 12-megapixel f/1.8 camera that is leagues better than the 8-megapixel f2.4 camera in the iPad. The iPad Pro's camera supports a laundry list of features not available in the iPad, like True Tone Flash, stabilization for live photos, wide color capture, 4K video recording, and more. 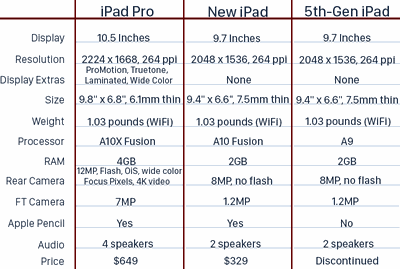 So which one should you buy? If you want an impressively fast but affordable tablet that works with Apple Pencil and is going to play the most recent games and apps for several years to come, go with the iPad.

If you want the fastest, thinnest device you can get with the absolute best display available on the market, go with the iPad Pro, but don't buy right now if you can hold out for a refresh. We're expecting to see updated iPad Pro models either in June or September with slimmer bezels, no Home button, and support for the Face ID facial recognition system first introduced in the iPhone X.

joelt999
You forgot about the Smart Connector on iPad Pro which is not present on the 9.7" iPad...
Score: 25 Votes (Like | Disagree)

Scottsoapbox
Need to update the Pro to help justify that price difference. New iPad is pretty close for half the price.
Score: 12 Votes (Like | Disagree)

itsmilo
Personally True Tone is the worst. First thing i disabled after force trying it a few days
Score: 11 Votes (Like | Disagree)

mi7chy
Only 2GB DRAM with no future proofing and that has to be upgraded in a year? 2GB is what's standard on $40 Android devices.

The 4GB Acer ChromeOS pen tablet is making much more sense since it can be used in tablet mode for preschool and early elementary then with keyboard/mouse for higher elementary up to high school. No need to disrupt kids' education by switching ecosystem in the process.
Score: 11 Votes (Like | Disagree)

Superhappytree
I’d still take the Pro every time. ProMotion alone is worth it (would be better if iOS 11 wasn’t so crap). It also has; a laminated screen with superior colours, True Tone, better cameras same as iPhone 7, 4GB RAM compared to 2GB, Smart Connector, 4 speakers compared to 2, 2nd gen Touch ID compared to the slower 1st gen, A10X processor compared to the standard A10.

All of that adds up to me. All of the major factors of a tablet are better on the Pro: display, processor, speakers, RAM, design, Touch ID etc. It's worth the extra £300 for future proofing. The 4GB RAM alone will be better off in the long run, 2GB is already too little.
Score: 9 Votes (Like | Disagree)
Read All Comments