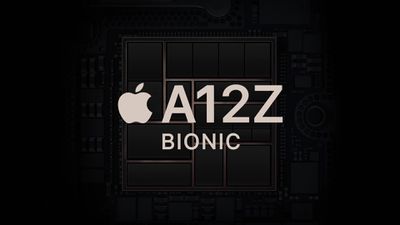 In this guide, we'll cover the A12Z processor and how it compares to the A12X processor that Apple used in the 2018 ‌iPad Pro‌ models.

This is the first time that an ‌iPad Pro‌ refresh has had a chip update is iterative rather than a new design, with the 2020 ‌iPad Pro‌ using an A12Z and not an A13X or A14 chip as might be expected.

What's Changed in the A12Z?

Apple in its marketing materials made no references to any CPU performance improvements compared to prior-generation models as it often does when introducing chip upgrades. Instead, Apple said that the ‌iPad Pro‌ is "faster and more powerful" than most Windows laptops, which is the same thing that it said about the 2018 models.

Apple did, however, highlight the 8-core GPU, which is the only notable upgrade in the A12Z compared to the A12X, which has been advertised as having a 7-core GPU even though it may in fact be an 8-core GPU chip with one core disabled.

Apple's own language suggests little change to processor performance, which has been reflected in benchmarking tests.

Given the similarities in performance and the minor letter tweak in the A12Z vs. the A12X, it appears the new chip is a re-binned version of the A12X with an extra GPU core enabled.

Evidence from teardown site TechInsights indicates that the A12X chip physically has an 8-core GPU with one of the cores disabled, which means the A12Z is the same version of the chip with the disabled core enabled.

It's not unusual for chip manufacturers to render one core of a processor inoperable when it isn't meeting yield levels, and that appears to be what Apple has done now. The manufacturing of the A12X chip has improved enough that yields have gotten better and all 8 cores are functional.

The 2020 ‌iPad Pro‌ is a marginal upgrade compared to the 2018 model, but it's still faster than some notebook Macs and many notebook PCs, as the 2018 ‌iPad Pro‌ was blazing fast.

With no major changes to performance, the new LiDAR Scanner, upgraded RAM in lower-tier storage models (now 6GB across the board) and the new ultra wide-angle camera are the main new features in the 2020 ‌iPad Pro‌ model, which, for most 2018 ‌iPad Pro‌ owners, are not going to be a significant enough changes to warrant an upgrade.

As of right now, there are few apps able to take advantage of the LiDAR Scanner so while it may become increasingly appealing in the future, at the current time, most 2018 ‌iPad Pro‌ owners should hold onto their tablets and pass on shelling out the extra cash for an upgrade.

There are rumors that Apple will introduce high-end ‌iPad Pro‌ models that feature 5G connectivity and mini-LED displays at the end of 2020, so it's possible we will see another ‌iPad Pro‌ refresh before the end of the year.

In these new models, Apple could introduce an A14X, based on current rumors.

Have questions about this guide, want to offer feedback, or know of something that we left out? Send us an email here.