Apple used to sell a 12-inch Retina MacBook with a low-power Core M chip, but it was discontinued back in 2019. Apple's smallest notebooks have since been the 13-inch MacBook Air and MacBook Pro models, but current rumors indicate that Apple might be bringing back a smaller 12-inch form factor. 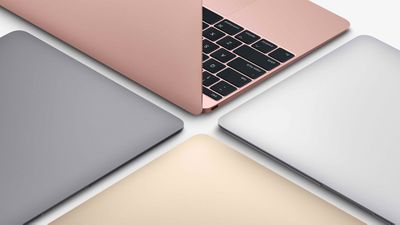 This guide covers everything that we know so far about the 12-inch MacBook.

We don't know specifics about the 12-inch MacBook at this time, such as its exact size beyond the 12-inch rumor. At 12 inches, the MacBook would be the smallest notebook in Apple's lineup, and it would even be smaller than the 12.9-inch iPad Pro.

We don't know what family the MacBook might be in. It could be a ‌MacBook Air‌, or it could be in its own "MacBook" category. There's also a chance that it could replace the 13-inch MacBook Pro, joining the 14-inch and 16-inch MacBook Pro.

Bloomberg's Mark Gurman says that development on the 12-inch MacBook is in the early stages, but the machine is expected to feature an M3 chip.

Twitter user Majin Bu, who has something of a mixed track record, has suggested that it could be a MacBook Pro equipped with next-generation M2 Pro and ‌M2‌ Max chips. The ‌M2‌ Max chip is expected to feature a 12-core CPU and up to a 38-core GPU, an improvement over the M1 Max that has a 10-core CPU and a 32-core GPU. It is not yet clear if this rumor is accurate.

While reliable sources like Bloomberg have indicated that a 12-inch MacBook is in the works, another source who often has accurate insight into Apple's plans is skeptical.

Display analyst Ross Young said that he isn't sure Apple is working on a 12-inch model. Young believes that Apple is focusing on notebooks that are 13-inch or larger at the current time, and companies that he spoke with in Apple's supply chain are not aware of work on a 12-inch machine.

Apple analyst Ming-Chi Kuo has also said that he has not heard rumors of a 12-inch MacBook.

If it's actually in the works, the 12-inch MacBook could launch at the end of 2023 or in early 2024, according to Bloomberg's ‌Mark Gurman‌.

Have questions about the 12-inch MacBook or want to offer feedback on this guide? Send us an email here.

Friday June 24, 2022 12:09 pm PDT by Hartley Charlton
Apple announced a major update for its high-end MacBook Pro models last year, with the new machines featuring a complete redesign, the M1 Pro and M1 Max chips, larger mini-LED displays with ProMotion, an HDMI port and SD card slot, full-sized function keys, and more. This month, Apple updated the 13-inch MacBook Pro with the M2 chip, so how do the machines compare? Despite both being MacBook ...
Read Full Article • 53 comments

Friday August 5, 2022 1:52 pm PDT by Juli Clover
Apple is developing new versions of the 14- and 16-inch MacBook Pro models, but it sounds like they will be fairly minor updates following a complete redesign in 2021. We do know the machines will get M2 Pro and M2 Max chips that will bring notable performance improvements. This guide highlights everything that we know about the upcoming 14- and 16-inch MacBook Pro models, and it will be...
Read Full Article • 188 comments

M1 vs. M2 MacBook Pro: Is It Worth the Upgrade?

Friday June 17, 2022 8:57 am PDT by Hartley Charlton
Apple's M2 MacBook Pro comes over a year and a half after its M1-based predecessor. The new device features the exact same design, but there are several important under-the-hood differences between the two machines that could make it an upgrade worth considering for some users, even though it may not be worthwhile for many customers. The 13-inch MacBook Pro is often chosen by those who...
Read Full Article • 157 comments

M1 vs. M2 MacBook Air Buyer's Guide: Is It Worth Upgrading?

Thursday July 7, 2022 1:47 pm PDT by Hartley Charlton
Apple's MacBook Air with the M2 chip comes over a year and a half after its M1-based predecessor. The new device features a complete redesign as well as several important under-the-hood improvements that could make it a major upgrade worth considering for many users, even though it may not be worthwhile for some. The MacBook Air is often chosen by those who require a portable, more...
Read Full Article • 144 comments

Friday June 3, 2022 1:29 pm PDT by Juli Clover
Apple's 33rd annual Worldwide Developers Conference is set to kick off on Monday, June 6 at 10:00 a.m. Like the 2020 and 2021 events, it will be held in a digital-only capacity, so it is free for all developers worldwide to attend. Subscribe to the MacRumors YouTube channel for more videos. The keynote event will give us our first look at new operating system updates, including iOS 16, iPadOS ...
Read Full Article • 162 comments