Apple today released a new HomePod 16.3 software beta, which will accompany the iOS 16.3, iPadOS 16.3, tvOS 16.3, watchOS 9.3, and macOS Ventura 12.3 releases. The update adds support for the new ‌HomePod‌ and HomePod mini features that were announced today alongside the surprise introduction of the second-generation ‌HomePod‌. 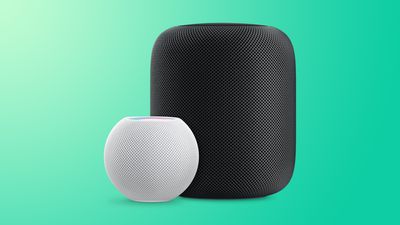 Installing the 16.3 ‌HomePod‌ software adds support for temperature and humidity sensing, both on the ‌HomePod mini‌ and on the second-generation ‌HomePod‌.

Ambient sounds have been remastered to be more immersive and can be added to scenes, automations, and alarms in the Home app, and recurring Home automations can be set up using Siri commands. Apple has also added a unique confirmation tone that will play when smart home requests are enacted for accessories that are located in a different room or that do not show a visible change. Find My integration for ‌HomePod‌ also lets you ask ‌Siri‌ for the location of friends and family.

For the first and second-generation larger ‌HomePod‌ models, optimized audio tuning provides improved clarity for spoken content like podcasts and audiobooks, and on the first-generation ‌HomePod‌, there are updated volume controls for more granular adjustments at lower volumes. Apple's full release notes for the update are below.

- Temperature and humidity sensing measures your indoor climate with HomePod (2nd generation) and HomePod mini
- Remastered ambient sounds are more immersive and can now be added to scenes, automations, and alarms in the Home app
- Find My on HomePod now enables you to ask Siri for the location of friends and family, if they have shared it with you Recurring Home automations can be set up using just your voice
- Siri confirmation tone will now play to indicate when smart home requests are completed for accessories that may not visibly show a change or are located in a different room
- Audio tuning optimizes spoken content such as podcasts for even greater clarity on HomePod (2nd generation) and HomePod (1st generation)
- Updated volume controls on HomePod (1st generation) give you more granular adjustments at lower volumes

The ‌HomePod‌ 16.3 update is set to be released to the public sometime next week, and it will be able to be installed on HomePods using devices that are running iOS 16.3, iPadOS 16.3, or ‌macOS Ventura‌ 13.2. The updates will bring new features to existing HomePods, and enable features for the second-generation ‌HomePod‌ that launches on February 3.

JosephAW
Was hoping for accelerometer feature so I know when the cat knocks it off the table. o_O
Score: 23 Votes (Like | Disagree)

Was hoping for accelerometer feature so I know when the cat knocks it off the table. o_O

I was thinking a Crash Detection feature would be sufficient. ?
Score: 11 Votes (Like | Disagree)

I’m so glad Apple has brought back the HomePod. Dang! The software is jam-packed with very compelling features already.
Score: 10 Votes (Like | Disagree)

zachz
Cool, I'm excited for the humidity and temperature sensing additions to my minis.

Used to have baseboard heating so I could use Siri to see and adjust the temperature, now I moved somewhere with central heating so it's no longer smart, but still nonetheless a cool stat to see.

Humidity will be cool for plants I guess? Now I'm going to be annoyed until I find ways to use both sensors in my HomePods haha
Score: 9 Votes (Like | Disagree)
Read All Comments