While Apple has increased the level of customization iPhone users have access to over the years, the ‌iPhone‌'s system-wide font has been one thing users have not been able to change. Thanks to a new tool created by a developer, however, users will now be able to change their ‌iPhone‌'s font if they're running an older version of iOS 16. 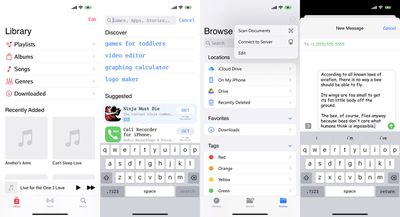 To check what version your ‌iPhone‌ is running, go to Settings -> General -> About and see what is listed as the iOS version. Apple last weekend stopped signing iOS 16.1.2, meaning if you're running iOS 16.2, you will not be able to downgrade.

The tool is available on GitHub as an IPA file and lets users change their ‌iPhone‌'s font to one of several choices, including Comic Sans MS, Fira Sans, DejaVu Sans Mono, and others. Using the tool will change the appearance of your ‌iPhone‌, as seen in the screenshots provided by Zhang below.

Users are heavily advised to update their device to iOS 16.2 as it includes important security fixes and a host of new features, including new options for the always-on display on the iPhone 14 Pro, Apple Music Sing, the new Freeform app, and more. You can learn more about iOS 16.2 using our guide.

MajorFubar
Being able to make simple customisations like this is partly why Android is so wholly dominant worldwide outside of USA, but I wouldn't endorse downloading something that exploits a security loophole in order to customize your iPhone. The whole idea seems sketchy as eff.
Score: 19 Votes (Like | Disagree)

iBluetooth
Be careful about installing a 3rd party IPA file. The developer gets full access to your phone!
Score: 14 Votes (Like | Disagree)

FloridaScrubJay
And after your font is changed, your bank account will be depleated.
Score: 9 Votes (Like | Disagree)

Oh please oh please let me install something that takes advantage of a security loophole. ?

It’s unfortunate that it’s being advertised by MacRumors without sufficient warning of how dangerous this is. Someone is going to do this and get burned really bad.
Score: 9 Votes (Like | Disagree)
Read All Comments