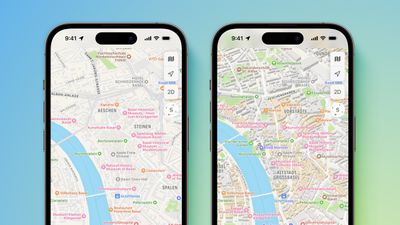 A before and after look at Apple Maps in Switzerland
Look Around is also expanding to all of these countries starting today, offering high-resolution street-level imagery in the Maps app. The feature is similar to Google's Street View, but with smoother transitions when panning and zooming.

As noted by Apple Maps expert Justin O'Beirne and our readers, the redesign has also gone live in Saudi Arabia and Israel.

The revamped Apple Maps experience first launched in the U.S. in 2019 and has since expanded to the U.K., Ireland, Canada, Spain, Portugal, Italy, Australia, New Zealand, Singapore, France, Germany, and select other countries and territories.

Soylent Yellow
And apparently Basel has been added to the Netherlands. Did our troops sail up the Rhine?
Score: 9 Votes (Like | Disagree)

I disagree on the "giving up" part, Apple Maps has something going that's tighter than google maps, and i think that if they keep it up they can give a more consistent experience than google does

at the moment the QC is garbage though
Score: 8 Votes (Like | Disagree)

Tacorumors
Dear Macrumors, this screenshot is Swiss, not the Netherlands…
Score: 7 Votes (Like | Disagree)

So is Apple Maps now as good as Google Maps in the Netherlands or is it still not worth trying out?

Public transport navigation is a nightmare as a commuter, because apple's algorithm basically selects one route, stop thinking, and puts the next cycles of that same route in the result screen, while often there are many different routes to a specific stop. It doesn't even take into account effective station departure times altered by delays, so a train that will take you to your destination that's right in front of your nose won't show up in the app, only the next one (even if that one is also delayed)

On top of that, it doesn't take into account transfer times at all. On my commute, it basically recommended a 1min transfer time as okay, ...to transfer across 6 platforms.

Compounded with the above issue it basically makes public transport navigation on it worthless as I can't pick any other route.

(I've notified apple of both bugs, but no response, obviously)

Cycle directions don't exist in NL, except in some cities, apparantly.

Discovery of properties is alright, but it's lighter on information than google is, and so sometimes I have had multi-year out-of-date information about certain companies, where another one had already moved in when the one on the map had closed down.

In general I'd say that I want to use Apple Maps, it's UI is very nice and not cluttered like google maps is, but it just lacks in features in general, and feels very neglected for Europe (minus UK)

The only reason I reasonably use it nowadays is because apple prioritises its own map app over google maps, so it shows up without unlocking my screen, and when public transport actually works, their notifications to get out are actually very accurate
Score: 6 Votes (Like | Disagree)

Google forced Apple to build their own maps by withholding features from iOS to give Android an advantage. Google Maps didn’t even support turn-by-turn navigation when it was the default app. They didn’t add it until the stand alone version of Google Maps after Apple Maps launched. If you like Google Maps more, then use it. The competition with Apple has made both maps better.
Score: 6 Votes (Like | Disagree)
Read All Comments