Deals: Get the Year's Best Prices on Apple's MacBook Pro at Up to $499 Off

We've been keeping an eye on all of the Apple products that have major discounts and are still in stock with guaranteed Christmas delivery. As expected, the cross section of products that fall under these categories is low, but now includes Apple's 2021 MacBook Pro notebooks on Amazon at up to $499 off. 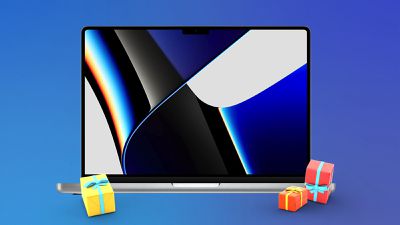 Starting with the 1TB 14-inch MacBook Pro, you can get the Space Gray model for its all-time low price of $1,999.99, down from $2,499.00. Free delivery options set the arrival window for December 21 as of writing, and only Space Gray is available.

If you're on the hunt for more discounts, be sure to visit our Apple Deals roundup where we recap the best Apple-related bargains of the past week.

Have you made good use of the 1TB? I'm considering the 512GB model if it drops to $1599 again, but paying an extra $400 for just 1/2 TB more and the slightly faster CPU/GPU seems like a stretch.

I think the short answer is it depends where you are today. Take a look at what's on your drive and assume you will need double in 2-3 years time. If that doubling takes you close to, or above 512GB, then consider the 1TB machine. That is, of course, you plan to keep the machine that long.

As for me, I keep mine at around 650GB, but there's stuff on there that I don't need day to day, it's just convenient to have. I am a bit of a data hoarder, but a big space hog is a Windows 11 VM (which I need) and a couple of games on it (which I don't). I have all the Logic Pro sounds on the machine and a huge photo library, 200gigs of email and documents since 2000 (I never delete email). (I also have a 40TB NAS that's about half-full, so there's that!!)

I could cope with a less but my last two Macs were forced upgrades because of disk space. The CPU, RAM and overall performance was fine, but I kept running low on storage, and it got annoying having to juggle external drives when I wanted to edit some video (esp. on the 256GB 2015 15" MBP because drives kept disconnecting.)

It ultimately depends on software and MacOS, but I think the M1Pro CPU's are going to have a long life-span, like 3-5 years before they start to feel old, and 5-7 years before they get annoying to use. A year into ownership, and I have a ton of background apps, foreground apps, 3 screens and too many windows, then I open up a Windows 11 VM and then switch to another user account via fast user switching - and it just doesn't slow down. And that's with "just" 16GB RAM. Amazing.
Score: 3 Votes (Like | Disagree)

Yup. And now you have had a year's usage of the world's best laptop (IMO) at the time. But now M1 is last year's tech, at least a year behind what Apple will gives us in the next 1-3 months. Anyone buying M1 today is choosing to spend the next 3-6 years a year behind on the tech curve.

Interesting, but M2Pro is likely going to be minor speed bump of 15-20%. Put it this way, I don't think that many M1Pro owners are even close so to the limits of their machines, so despite being a year old this is still a solid purchase for many, vs. $500 extra on M2Pro with power that most don't need.
Score: 2 Votes (Like | Disagree)

Killer deal. I bought my 14" 1TB at full retail $2499 when it was released and it was (is) worth every penny. Best laptop I have owned.

No way "Those M2 Pro/Max models might not show up until late summer 2023" because they are already overdue and Apple has been missing out on lots of MBP sales. Only an extraordinarily serious supply disruption could force Apple to keep leaving all that much money on the table for a year.

Its possible at the same time due to the state of the economy, nobody is really buying MacBook Pros. Everyone in some ways is working with what they already have. Also, whoever wanted a powerful MacBook Pro already bought one and has no plans to upgrade for years.
Score: 1 Votes (Like | Disagree)

Just curious I've never bought an Apple product from anyone but Apple, any drawbacks? Are they new or refurb?

Generally such boxes are new, no issues except discounts are usually only available with base RAM and base SSD, which is a deal killer for most pro users. Most pros will find that they take advantage of more RAM and more SSD in the next 5 years than they did in the last 5 years, a solid truism since 1984. In my experience Apple supports everything equally no matter where purchased.

All that said, personally I prefer buying from Apple unless the savings are quite significant.
Score: 1 Votes (Like | Disagree)
Read All Comments