Users still want a "mini" form factor iPhone, but a complete redesign is the most-desired feature from the iPhone 15 lineup, according to a survey conducted by SellCell. 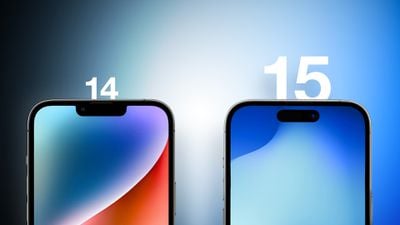 When asked if they had plans to upgrade to an iPhone 14 model, 13.6 percent of respondents said they had already done so – but a further 29.7 percent still have plans to do so in the immediate future. Of the 56.7 percent who have no plans to upgrade, 45.3 percent said they plan to hold onto their current device for longer, and 5.1 percent said that they are waiting for the launch of the ‌iPhone 15‌ lineup next year. 2.4 percent of respondents are apparently waiting for the launch of the fourth-generation iPhone SE. 59.4 percent of respondents who plan to buy an ‌iPhone 14‌ model say they are happy to wait five weeks to get hold of a new device.

Looking to the ‌iPhone 15‌ models, aesthetics were at the forefront of the survey responses when asked what they most want from next year's new ‌iPhone‌ lineup. 35.2 percent of respondents said that they are most eager to see a design overhaul for the device, while 30.3 percent most want to see new color options.

CharlesShaw
Polls are one thing, but I felt like I was casting my vote for the mini form factor when I purchased the 13 mini this week from Apple.
Score: 29 Votes (Like | Disagree)

BrownyQ
I hold out hope for the return of the mini form factor, perhaps some day when it comes with the "Dynamic Island" feature as well. In the mean time, I will roll with my fantastic 13 mini; at the end of 2023 I might pay for a battery replacement to make her run like new again.
Score: 25 Votes (Like | Disagree)

Small iPhone fans are a very small group of very vocal people. You can’t go by what is posted on social media or forms like this as a judge to what people want. Apple learned that the hard way.

They didnt learn that the hard way, they just dont care about the actual LARGE group of very vocal people.

If you want to have some kind of giant sized brick in your pants bulging out of your front pockets in public and look ridiculous, you have a plethora of choices for that. Many of us don't want that and have basically ZERO options.
Score: 20 Votes (Like | Disagree)

CmdrLaForge
I hope for a new mini as well. Preferably a Pro version with fantastic camera!
Score: 19 Votes (Like | Disagree)

This is why you will see people on here talking about smaller iPhones but I’ve never met such a person in real life.

That’s because our phones fit in our pockets, lol.
Score: 18 Votes (Like | Disagree)

TheYayAreaLiving ?
Instead of iPhone 14 Plus, Apple should have released iPhone 14 Mini with better battery life and camera. Maybe Apple will introduce iPhone Mini in Spring 2023 Apple Event. (include it with the iPhone SE line up).
Score: 17 Votes (Like | Disagree)
Read All Comments