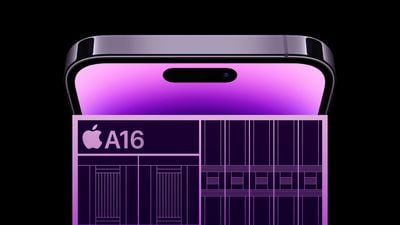 While the latest chip won't officially ship in smartphones for a few months, Geekbench scores for the chip have already been spotted in an unreleased Android handset. According to the results (via DealNTech), the latest Snapdragon 8 chip scored 1483 in single-core and 4709 in multi-core. The A16 Bionic scored 1874 in single-core and 5372 in multi-core. For comparison, the A15 Bionic chip, found in the iPhone 13 Pro and the lower-end iPhone 14 models, also scored higher than Qualcomm's latest chip with 1709 in single-core compared to 1483.

In a press release for the new chip, Qualcomm said it will "define a new standard for connected computing, intelligently engineered with groundbreaking AI across the board to enable extraordinary experiences." Qualcomm's senior vice president and general manager of mobile handsets, Chris Patrick, said, "Snapdragon 8 Gen 2 will revolutionize the landscape of flagship smartphones in 2023."

Performance claims made by Apple during the ‌iPhone 14 Pro‌'s keynote in September
The A16 Bionic chip in the ‌iPhone 14 Pro‌, like the latest Snapdragon 8 Gen 2 chip, is built on TSMC's 4nm process, and both offer improved performance and energy efficiency. The A16 Bionic chip features 16 billion transistors, a 6-core CPU, a 5-core GPU, and a 16-core Neural Engine. "The competition is still working to catch up to the performance of the A13, which we first introduced with iPhone 11 three years ago," said Greg Joswiak, Apple's senior vice president of worldwide marketing, during the Apple event in September.
Related Roundup: iPhone 14 Pro
Tag: Qualcomm
Buyer's Guide: iPhone 14 Pro (Neutral)
Related Forum: iPhone
[ 122 comments ]

d686546s
Apple's hardware continues to be impressive, but most users probably care most about the power efficiency.

Comparing benchmark scores has become a bit of a pointless exercise, really, when we're completely honest. They are all overpowered for what you really need in a phone.
Score: 20 Votes (Like | Disagree)

Apple's hardware continues to be impressive, but most users probably care most about the power efficiency.

Comparing benchmark scores has become a bit of a pointless exercise, really, when we're completely honest. They are all overpowered for what you really need in a phone.

I think they call it "race to sleep"

Plus... I'd say most of the common low-level work is handled on the efficiency cores without ever needing to fire-up the performance cores. That's another way modern chips are more efficient.

Maybe it's time to remove the fanboy from your handle and just stick with critic, what do you think?
Score: 11 Votes (Like | Disagree)

Apple's hardware continues to be impressive, but most users probably care most about the power efficiency.

The “but” seems misplaced here, as iPhones are ridicously better at power efficiency than anything else on the market.
Score: 10 Votes (Like | Disagree)