Popular password management service 1Password today confirmed that it will begin supporting passkeys in early 2023, allowing users to sign in to supported websites and apps without a password. Instead, biometric authentication on trusted devices is used to confirm your identity, and removing passwords from the equation means they can not be compromised or phished. 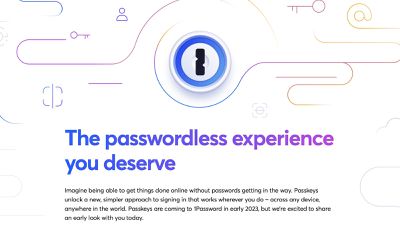 Apple rolled out support for passkeys in iOS 16, iPadOS 16, tvOS 16, and macOS Ventura, using iCloud Keychain to sync across devices for ease of use and redundancy. Apple has been working with members of the FIDO Alliance, including Google and Microsoft, to ensure interoperability of passkeys, and Apple's implementation of passkeys will be able to work with non-Apple devices by using your iPhone to scan a QR code and authenticate.

For 1Password users interested in seeing how passkeys work, the company has set up a demo on its website that requires a 1Password account and the latest version of the 1Password extension for Chrome or Edge. Support for Safari and Firefox has yet to be rolled out. 1Password also maintains a directory of websites and apps that have already started supporting passkeys, including Google, Microsoft, Twitter, eBay, Best Buy, GitHub, and more.

1Password says full support for passkeys will be coming to its browser extensions and desktop apps in early 2023, with mobile support to follow later.

It's a delight to use and you get a consistent experience across all your devices. It just works.

The fact that I will be able to use passkeys in the same consistent way on my Mac, iPhone, iPad, gaming PC and the occasional Linux VM is just pure gold to me.
Score: 29 Votes (Like | Disagree)

BB8
i know they're just trying to keep their business going but I'm pretty sure passkeys was developed with the idea that people shouldn't have to pay a yearly subscription just to keep track of a bunch of digital passwords.
Score: 25 Votes (Like | Disagree)

sniffies
Another subscription fee. No, thanks.

Apple implementation is more than enough for me, and I'm sure it's gonna be seamless.
Score: 21 Votes (Like | Disagree)

PeteBurgh
It's always good to have 1Password threads on here so everyone can express their delight for subscription-based software! ?

But the gradual roll out of passkeys is great and much welcome news.
Score: 20 Votes (Like | Disagree)

Maclver
Moved to StrongBox a few months ago from 1Password and haven't looked back!!
Score: 12 Votes (Like | Disagree)
Read All Comments