Twitter will not be moving forward with an "Official" label that would be used to identify companies, major media outlets, public figures, and others who are in danger of being impersonated on the social network, Twitter CEO Elon Musk said today. 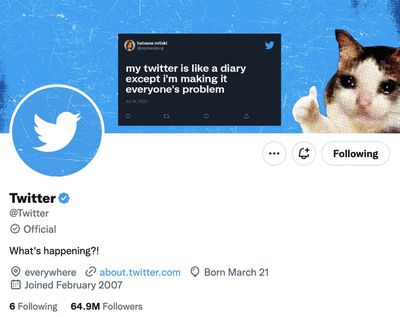 Just hours after Twitter began rolling out the "Official" checkmark that was provided to some accounts alongside the standard white and blue verification badge, Musk said that he has "killed" the feature.

"Blue check will be the great leveler," Musk added in another tweet. The white checkmark on a blue background was traditionally provided to higher-profile accounts that went through a verification process, but with Musk's takeover of Twitter, the badge will be provided to all Twitter Blue subscribers who pay $7.99 per month for a Twitter Blue subscription.

When the checkmark becomes available to any Twitter subscriber who pays, there will no longer be any kind of identity verification system on Twitter, which some users have expressed concerns about.

It is not clear if Twitter will implement some other method for differentiating between account types and providing identity verification, but it sounds like Musk will not allow such a feature. Musk has said that any Twitter handles "engaging in impersonation" without a clear parody label would be "permanently suspended," a move he enacted after verified users began changing their names to Elon Musk.

Update: Crawford now claims that the official label is still going out as part of the launch of Twitter Blue, but Twitter is focusing on "government and commercial entities to begin with. She says that what Musk meant is that Twitter is not focusing on giving the "Official" label to individuals. As of right now, though, the official labels that were provided to some accounts earlier today have been removed and have not been reinstated as of yet. There is no word on when the labels will return, nor if this is indeed what Musk meant.

The official label is still going out as part of the @TwitterBlue launch -- we are just focusing on government and commercial entities to begin with. What you saw him mention was the fact that we're not focusing on giving individuals the "Official" label right now. — Esther Crawford ✨ (@esthercrawford) November 9, 2022

dantracht
I never thought I’d see anyone or anything more indecisive and back and forth as my ex, but Twitter said hold my beer. This is wild.
Score: 45 Votes (Like | Disagree)

Beautiful Opinion
What an absolute s***show!
Score: 31 Votes (Like | Disagree)

TheYayAreaLiving ?
Is it just me or Elon Musk has been seeking attention desperately?

I don't think he knows exactly what he is doing or what he wants. He seems so lost.
Score: 30 Votes (Like | Disagree)

drinkingtea
He does not know what he’s doing.
Score: 27 Votes (Like | Disagree)

xxray
This is just embarrassing. No strategy, no planning, just using millions of users as a beta test. No, scratch that. Even a beta test is more thought out than this. This is just throwing random ideas to the wind. Being an employee there right now must be god awful.
Score: 19 Votes (Like | Disagree)

Wednesday November 9, 2022 3:11 am PST by Tim Hardwick
Twitter on Tuesday revealed details about the way its new verification scheme will work, with some originally verified accounts set to get an "Official" label, while users who pay the $7.99 monthly subscription for Twitter Blue will get a blue checkmark that isn't tied to identity verification. "A lot of folks have asked about how you'll be able to distinguish between @TwitterBlue...
Read Full Article • 145 comments

Twitter Blue Price to Increase to $8 Per Month, Will Include Verification Checkmark and Other New Features

Tuesday November 1, 2022 10:56 am PDT by Juli Clover
Twitter chief Elon Musk today said that the cost of the Twitter Blue subscription is going to be priced at $8 per month, which would be an increase of $3 over the current $4.99 per month price. Twitter Blue will include priority in replies, mentions, and search, which Musk says is "essential to defeat spam/scam," the ability to post longer video and audio clips, and half as many ads. Musk ...
Read Full Article • 241 comments

Twitter for iOS Updated With New $8 Subscription Offering Verification and More [Updated: Not Yet Live]

Saturday November 5, 2022 12:07 pm PDT by Sami Fathi
Twitter for iOS was today updated with support for Twitter's upcoming revamped Twitter Blue subscription plan that will enable users to pay $8 per month to be verified on the platform, with other perks such as fewer ads and priority replies. According to the App Store update, Twitter users in the United States, United Kingdom, Canada, Australia, and New Zealand will be able to subscribe to...
Read Full Article • 641 comments

Twitter Could Start Charging for Verification Next Week, Edit Button Reportedly Coming to All Users

Thursday November 3, 2022 5:51 am PDT by Tim Hardwick
Twitter aims to start charging users for blue check verification badges as soon as next week, as part of new owner Elon Musk's plan to further monetize the social media platform, according to a new report. The badges will be part of an $8-per-month Twitter Blue subscription, an increase of $3 over the current $4.99 per month price, which will also include priority in replies, mentions, and...
Read Full Article • 207 comments

Monday November 14, 2022 3:40 pm PST by Juli Clover
Twitter CEO Elon Musk plans to eliminate a Twitter feature that provides details on what device a tweet was sent from, information that has gotten Android promoters in hot water multiple times over the past several years. Musk said in a tweet this morning that Twitter will be eliminating the line that says "Twitter for iPhone" or "Twitter for Android," as this is a "waste of screen space."...
Read Full Article • 196 comments

Twitter to Charge $20 a Month for Verified Accounts, Reports Suggest

Monday October 31, 2022 2:44 am PDT by Sami Fathi
Twitter, now owned by Tesla CEO Elon Musk, is reportedly planning to charge users $20 per month if they want to become or stay verified on the platform, according to multiple reports. The Verge and Platformer are both reporting that Twitter is set to introduce a new tier to Twitter Blue, the social media platform's subscription service, that costs $20 per month and includes verification on...
Read Full Article • 588 comments

Thursday December 8, 2022 2:45 am PST by Sami Fathi
Apple yesterday announced that end-to-end encryption is coming to even more sensitive types of iCloud data, including device backups, messages, photos, and more, meeting the longstanding demand of both users and privacy groups who have rallied for the company to take the significant step forward in user privacy. iCloud end-to-end encryption, or what Apple calls "Advanced Data Protection,"...
Read Full Article • 161 comments