Apple today seeded the first betas of upcoming iOS 16.2 and iPadOS 16.2 updates to public beta testers, opening up the software to the general public. Today's beta comes one day after Apple provided the beta to developers. 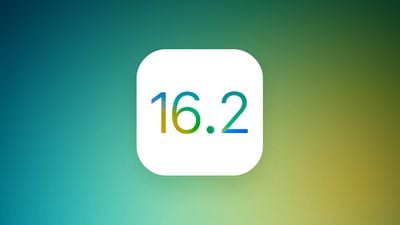 Public beta testers who have signed up for Apple's free beta testing program can download the ‌iOS and iPadOS 16.‌2 betas over the air after installing the proper certificate from the Public Beta website.

Unintentional Emergency SOS calls can be reported to Apple in iOS 16.2, and there are a few other minor changes that can be found in our iOS 16.2 feature guide.

Don't bother. There is a strong WFH bias from some people. They believe WFH means slacking off all day watching TV and playing video games. As if someone could stay employed that way. They also act like the software and hardware was perfect before WFH became a bigger thing. They are personally too irresponsible to work remotely and be productive (therefore stay employed) so they project that onto all others.

I’m about to start a WFH job and I’m thrilled. That’s less time in traffic and less money spent on gas. I can sleep in a little later too!
Score: 7 Votes (Like | Disagree)

What you are seeing with so many Bugs is the result from working from home. Less productive. More distractions. This is what you get.

t0rqx
Fix the wifi! They really should return to 1 year stability/performance and 1 year new features.
Score: 5 Votes (Like | Disagree)

What, do you mean my WiFi issues are caused by iOS and not my router? The frequent drops?

Yes MR has an article on it right before this one. You got Apple'ed, dude.
Score: 5 Votes (Like | Disagree)

You mean to tell me that my hour commute each way, 30 minute water cooler talk, non-stop colleague "drop bys", non-stop building "alarm tests", happy-hours starting an hour before EOD made me MORE productive?

Don't bother. There is a strong WFH bias from some people. They believe WFH means slacking off all day watching TV and playing video games. As if someone could stay employed that way. They also act like the software and hardware was perfect before WFH became a bigger thing. They are personally too irresponsible to work remotely and be productive (therefore stay employed) so they project that onto all others.
Score: 4 Votes (Like | Disagree)

I’m about to start a WFH job and I’m thrilled. That’s less time in traffic and less money spent on gas. I can sleep in a little later too!

And you'll be just as productive as in-office, heck possibly MORE productive.
Score: 4 Votes (Like | Disagree)
Read All Comments