Apple CEO Tim Cook has been touring Europe this week, sitting down for interviews with various media publications. Augmented reality has been a running theme in Cook's discussions, and it is a topic he brought up again in an interview with Dutch publication Bright, which is part of RTL News. 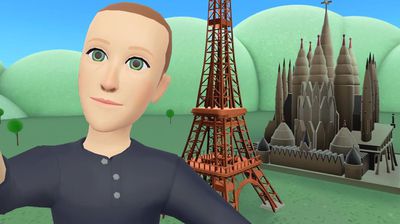 "I think AR is a profound technology that will affect everything," Cook said, echoing comments from Italy earlier in the week. "Like I said, we are really going to look back and think about how we once lived without AR."

Cook went on to say that it "won't be that long" before we live in a world where we wonder how we did without augmented reality. Cook said that virtual reality also has its uses because of how immersive it is, but it is not a replacement for real life.

"It's something you can really immerse yourself in. And that can be used in a good way. But I don't think you want to live your whole life that way. VR is for set periods, but not a way to communicate well. So I'm not against it, but that's how I look at it."

On Facebook's "metaverse," Cook said that it's important that people have an understanding of a product. "I'm really not sure the average person can tell you what the metaverse is," he added. Metaverse is a word that precedes Facebook, having first been used in the sci-fi novel "Snow Crash," but Facebook has embraced it, going as far as renaming the company "Meta." Meta CEO Mark Zuckerberg has said that the company is committed to developing a "metaverse," aka a future digital reality.

Apple is hard at work on its own virtual and augmented reality headset that's expected to be released in 2023, followed by AR "Apple Glasses" that could come out in 2024, but Cook has made it clear that Apple does not want to keep people from actual reality.

As he often does, Cook also spoke on the importance of programming as a universal language, and he touched on topics like climate change, recycling, and politics. Cook's full interview can be read over at Bright using Google translate for those who do not speak Dutch.

Cook this week also spent time in London visiting AFC Richmond, home of "Ted Lasso," Italy where he was awarded with an Honorary Degree in Innovation and International Management, and Germany, where he celebrated Oktoberfest and met up with developers.

triptolemus
Guess I'm old (46). I don't want anything to do with this ar/metaverse nonsense at all. I don't want a headset. I don't want glasses. I don't want implants. And I'm super tired of being presented with for-profit visions of the future.
Score: 100 Votes (Like | Disagree)

Spaceboi Scaphandre
Good god please change that cover image! Get him away! Get him awayyyyyyy!
Score: 73 Votes (Like | Disagree)

"I think AR is a profound technology that will affect everything," Cook said, echoing comments from Italy earlier in the week. "Like I said, we are really going to look back and think about how we once lived without AR."

TheYayAreaLiving ?
This whole metaverse Just looks creepy. I’m not a big fan of it at all.
Score: 50 Votes (Like | Disagree)

Mark looks extremely creepy in the MetaVerse ? just in the same way that he spies on all of us.

There's no universe or dimension where here he doesn't look creepy.
Score: 39 Votes (Like | Disagree)

Zuckerberg says there will be 1 billion people using metaverse in the next 10 years:

And why would anyone believe Zuck on that?
Score: 36 Votes (Like | Disagree)
Read All Comments

Thursday September 29, 2022 7:26 am PDT by Sami Fathi
Speaking at Università Degli Studi di Napoli Federico II in Naples, Italy, Apple CEO Tim Cook said that not too long from today, people will wonder how they led a life without augmented reality, stressing the "profound" impact it will have on the not so distant future. At the university, Cook was awarded an Honorary Degree in Innovation and International Management and also sat down for a...
Read Full Article • 395 comments

Monday November 28, 2022 3:00 am PST by Sami Fathi
Apple CEO Tim Cook has visited the victims of last week's crash at the Apple Store in the Greater Boston area, where an SUV crashed through the front of the store, injuring multiple people and killing one. Image Credit: WCVB According to local news channel Boston 25 News, Cook and Apple's chief of retail and people Deirdre O'Brien visited the victims of the crash at the South Shore Hospital....
Read Full Article • 83 comments

Monday November 14, 2022 7:27 am PST by Joe Rossignol
In an interview with CBS Mornings co-host Nate Burleson, Apple CEO Tim Cook confirmed that his company is taking a careful approach to hiring amid a period of increased economic uncertainty. The full interview will air on Tuesday, but a preview is available now. "So what we're doing as a consequence of being in this period is we're being very deliberate on our hiring," said Cook, when asked...
Read Full Article • 99 comments

Thursday August 25, 2022 8:14 am PDT by Sami Fathi
In a new wide-ranging interview with Popular Mechanics, Apple CEO Tim Cook discusses product innovation and how it drives Apple to make better products, allowing customers to repair their iPhones and Macs with the self-service repair program, Steve Jobs and his legacy, and more. During the interview published in a special edition of Popular Mechanics, Cook describes Apple's philosophy of...
Read Full Article • 132 comments

Thursday October 27, 2022 2:40 pm PDT by Juli Clover
During today's earnings call covering the fourth fiscal quarter of 2022, Apple CEO Tim Cook said that Apple has been constrained on the iPhone 14 Pro and Pro Max "from the beginning," which has had an impact on sales. Cook went on to say that Apple is "working very hard to fulfill demand" and that customer demand was "strong" and ultimately better than Apple anticipated. He expects that...
Read Full Article • 68 comments

Friday May 13, 2022 12:16 pm PDT by Joe Rossignol
Apple CEO Tim Cook today delivered the commencement address at Gallaudet University in Washington, D.C., which is the only university in the world where Deaf and hard of hearing students live and learn bilingually in American Sign Language and English. During his speech, Cook told undergraduates that his one piece of advice is to lead with your values throughout life. "What does it take...
Read Full Article • 88 comments