Apple Watch owners who stream music from Spotify have been urged not to update their devices to watchOS 9 because of a bug that causes streaming on the watch to stop working. 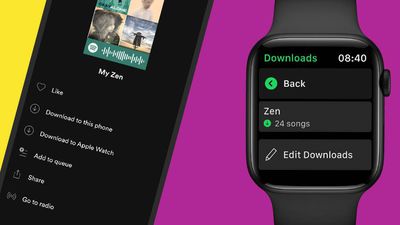 Spotify has been sending its users emails warning of the problem, which began to emerge soon after Apple released ‌watchOS 9‌ to the public on Monday. The message from the company reads:

Apple WatchOS 9 introduced a bug that causes Spotify streaming on the Apple Watch to stop working. We urge Spotify Apple Watch users not to install the WatchOS 9 update until Apple has implemented a fix for the issue. Users who are already affected can instead download their content to their Apple Watch and listen offline or stream from their phones.

According to user reports, streaming on Apple Watch stops working within the first minute, and yet the track progress bar continues to move, just minus audio. The problem occurs on both Wi-Fi and cellular connection, but there is no issue with Spotify media downloaded to Apple Watch.

Apple seeded the first beta of watchOS 9.1 to developers on Wednesday, and there are unverified reports that the point release fixes the Spotify streaming problem. However, Apple does not mention the issue in its release notes so users won't know for sure until Apple rolls out the next Apple Watch update to the public.

ffej207
I've been a loyal Spotify user for years now, and there is no evidence that Apple is doing anything "to them." They want to cry and complain about Apple keeping them from innovating, but when Apple gives them the keys, they just screw stuff up. Spotify has NEVER worked exactly right on Apple products, and rather than hiring a competent development team, they just cry to the press about Apple keeping them down. It's incredibly frustrating.

As someone mentioned above.. there's been months of betas available. Did they not do any internal testing?
Score: 42 Votes (Like | Disagree)

djcerla
Because the beta wasn’t available at all.
Score: 35 Votes (Like | Disagree)

[HEADING=2]Spotify have not updated their software to work with watchOS 9[/HEADING]
Score: 30 Votes (Like | Disagree)

JUiCEJamie
So Spotify haven’t fixed the bug since Watch OS 9 beta came out in JUNE?!

stocklen
For goodness sake.... Spotify has had access to the betas right from the start and had over 3 months to test and fix this... just like every other apple 3rd party developer.

Why do nothing, and then blame apple and tell customers to not update their watches?

They've had more than enough time. Blame them not apple
Score: 19 Votes (Like | Disagree)

How does Apple with all of it’s resources & beta testers not catch this before the final public release?

You mean how does Spotify with all of its resources and beta testers not catch this and tell people a couple weeks ago not to upgrade because of issues? This is more of a Spotify issue than an Apple issue, although Apple is likely at least partially to blame.

Edit: Why I say it's not fully Apple's fault. Here's an example. I use Bluetooth to connect my iPhone to my car's audio system. If I'm listening to an audiobook in Audible at a speed faster than 1X, everything works well. If I listen to an audiobook at faster than 1X using another app, the material plays but there is no sound until I put the playback speed back to 1X (Libby also works but any others that I've tried do not). I've contacted the devs of these other apps and they didn't want to try and fix the issue because my experience is possibly just an outlier (although it doesn't affect only my phone but does all other phones that connect to my car), although it's not just my car because I've tried this with other cars including various rental cars over the years and they all have the same issue. Audible and Libby can play books back at more than 1X but other apps cannot.

Is that the car manufacturer's fault? Not really, because it works for some apps. It's primarily the developers' faults for the other apps. This is like the Spotify situation, although again, Apple is at least partially to blame.
Score: 15 Votes (Like | Disagree)
Read All Comments

Wednesday August 17, 2022 9:45 am PDT by Juli Clover
Apple today released watchOS 8.7.1, a minor update to the watchOS 8 operating system that launched in September 2021. watchOS 8.7.1 comes a month after the launch of watchOS 8.7, and it focuses on bug fixes. The watchOS 8.7.1 update is only available for Apple Watch Series 3 models, and those who have a newer Apple Watch will not see the update. watchOS ‌8.7.1 can be downloaded for free...
Read Full Article • 62 comments

Wednesday September 14, 2022 10:05 am PDT by Juli Clover
Apple today seeded the first beta of an upcoming watchOS 9.1 update to developers for testing purposes, with the new beta coming just one day after the launch of watchOS 9. To install ‌watchOS 9.1, developers will need to download the configuration profile from the Apple Developer Center. Once installed, ‌watchOS 9.1‌ can be downloaded through the dedicated Apple Watch app on the...
Read Full Article • 11 comments

Tuesday September 20, 2022 10:14 am PDT by Juli Clover
Apple today seeded the second beta of an upcoming watchOS 9.1 update to developers for testing purposes, with the new beta coming one week after Apple released the first watchOS 9.1 beta. To install ‌watchOS 9.1, developers will need to download the configuration profile from the Apple Developer Center. Once installed, ‌watchOS 9.1‌ can be downloaded through the dedicated Apple Watch...
Read Full Article • 4 comments

Wednesday September 7, 2022 12:02 pm PDT by Juli Clover
Apple today seeded the release candidate version of an upcoming watchOS 9 update to developers for testing purposes, with the new beta coming one week after Apple released the seventh beta to developers. To install ‌watchOS 9, developers will need to download the configuration profile from the Apple Developer Center. Once installed, ‌watchOS 8‌ can be downloaded through the dedicated...
Read Full Article • 16 comments

Wednesday July 20, 2022 9:43 am PDT by Juli Clover
Apple today released watchOS 8.7, the sixth major update to the watchOS 8 operating system that launched in September 2021. watchOS 8.6 comes around two months after the launch of watchOS 8.6, an update that expanded ECG functionality to Mexico. watchOS ‌8.7 can be downloaded for free through the dedicated Apple Watch app on the iPhone by going to General > Software Update. To install...
Read Full Article • 58 comments

Tuesday August 16, 2022 10:09 am PDT by Juli Clover
Apple today seeded the fourth beta of an upcoming watchOS 9 update to its public beta testing group, allowing non-developers to experience the new watch software ahead of its fall release. The new beta comes a week after the third beta, and it corresponds to the sixth developer beta that was released yesterday. The watchOS 9 update can be downloaded after upgrading your iPhone to the public...
Read Full Article • 19 comments

Sunday September 25, 2022 6:50 am PDT by Sami Fathi
Apple may decide to release its remaining products for 2022, which include updated iPad Pro, Mac mini, and 14-inch and 16-inch MacBook Pro models, through press releases on its website rather than a digital event, according to Bloomberg's Mark Gurman. In his latest Power On newsletter, Gurman said that Apple is currently "likely to release its remaining 2022 products via press releases,...
Read Full Article • 153 comments