Apple today seeded the second beta of macOS Ventura to its public beta testing group, allowing non-developers to test the new ‌macOS Ventura‌ operating system ahead of its release. The second beta comes a little over two weeks after the first public beta and it corresponds with the fourth developer beta. 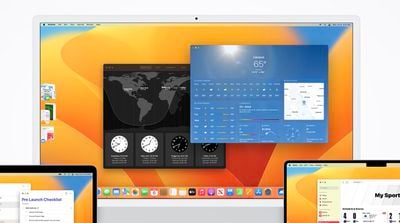 ‌macOS Ventura‌ introduces Stage Manager, a new multi-tasking option for focusing on a task while having other apps waiting in the wings. ‌Stage Manager‌ puts your main app front and center, tucking your other apps to the side for quick access.

Realityck
I found this dev, now PB beta 4 to run better then what you guys received with updated beta 3.
Score: 3 Votes (Like | Disagree)

Realityck
You can see the large number of fixes in the notes with beta 4. Both for MacOS and iOS/iPadOS

IMHO this MacRumors identifying this as 1st PB and 2nd PB in their article is for the birds, you are on the 4th beta of Ventura. ;)
Score: 2 Votes (Like | Disagree)

Thanks a million, going to register for beta now to check it out ?

Confirmation that the audio issue appears top be resolved with this Beta
Score: 1 Votes (Like | Disagree)

imnotthewalrus
Still not showing for me...:(
Score: 1 Votes (Like | Disagree)
Read All Comments

Sunday February 5, 2023 6:06 am PST by Hartley Charlton
A new version of the Mac Studio with the "M2 Ultra" chip is unlikely to arrive in the near future, according to Bloomberg's Mark Gurman. In the latest edition of his "Power On" newsletter, Gurman explained that since the upcoming Apple silicon Mac Pro is "very similar in functionality to the Mac Studio," Apple may wait until the release of M3- or M4-series chips to update the machine, or...
Read Full Article • 498 comments