In response to the Digital Markets Act receiving final approval from the Council of the European Union this week, Google today announced that it now allows developers of non-gaming apps to offer alternative billing systems to users in the European Economic Area (EEA), including countries in the European Union, Iceland, Liechtenstein, and Norway. 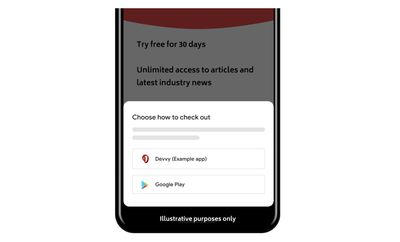 Google will reduce its commission by 3% for in-app purchases made through an alternative billing system in the EEA. Google says this policy means 99% of developers will be charged a fee of 12% when a customer completes a transaction through a third-party payment processor, compared to 15% through Google Play's billing system. Google said this reduced fee supports the company's investments in Google Play and Android.

Google said it expects to expand its alternative billing system program to developers of gaming apps for users in the EEA in advance of the Digital Markets Act's effective date, which is at least six months away, according to the European Council.

Google Play's billing system will continue to be required for all apps distributed through the store in all other countries, including the United States.

Developers interested in learning more about the program and signing up can visit this support document on Google's website. Google said additional program requirements and safety measures will be shared in the coming weeks.

dguisinger
Sigh... the point of this, especially with in-app subscriptions is that the store (Google/Apple) shouldn't be skimming off the customer/developer relationship. Knocking off the 3% was never the point, and they will only force new regulations.

The reason Apple already has so many carveouts is they know they can't justify it... they would have no streaming service apps if they were forced to pay 30%. No one says "Oh, I stumbled across Netflix on the App Store, I guess I will subscribe". Many of these companies have brand recognition, and can find their own customers. No body stumbles across Uber and thinks huh, i'll use that. No, they go looking for Uber because Uber has a brand. They would have no physical product apps for ordering products at stores or food from restaurants.

Apple and Google are so full of themselves to think they have a right to 30% of the revenue from companies that aren't these massive companies who were able to negotiate carveouts.
Score: 18 Votes (Like | Disagree)

As a consumer... what difference does it make if an app uses a different payment processor?

In the physical space... I've never once considered the payment processor Walgreens uses. Or McDonalds.

The typical retail card processing fee is between 1%-3%, and some have a min fee based on the total sale.

True... but no one ever said Apple charges 15% or 30% just for credit card processing.

There is other stuff that Apple is doing to earn their commission.

Here is another forum post ('https://forums.macrumors.com/threads/epic-games-unlikely-to-win-injunction-in-ongoing-fortnite-battle-with-apple-jury-trial-possible.2257511/page-10?post=28966869#post-28966869') detailing some of what you get for Apple's commission fee:

- we developers get up to 1 petabyte of user storage via CloudKit 100% free. Bear notes app does this and they manage 0 servers for their subscription-paid users.
- we could submit 1000 app and app updates in a year which translates to Apple paying about 1000 man-hours worth of paychecks at about $30/hr or ~$30k for app review
- we have free access to using Apple Maps instead of paying Google tons of money to use their mapping API keys (for those high volume users). this saves Yelp and Facebook a ton of money as well as small developers.
- we get many more new features every single year via the SDK compared to Android (like ARKit, Core ML, SwiftUI, Vision, etc... just to name a few).
- we get global distribution for free (including China, you know, where Google Play doesn't exist. also developers generally have to setup their own servers in China because of the great firewall, but if you used CloudKit, it just works without any extra setup).
- we get app store curated editorial with a chance to reach front page in front of 500 million customers a week.
- we have no credit card fees or international taxes to worry about
- Apple provides support to customers asking for refund for an app and app store support in general
- Testflight service is free (for public and private testing)
- app store automatically creates many different binaries of our app and distributes device-optimized versions to each customer. a 1 gigabyte app with many different permutations of versions across hundreds of servers around the world means Apple is hosting about several terabytes in the cloud for us from one single app
- push notifications/push notification sandbox servers
- Web SDK version of cloudkit/mapkit so that you can use it for a web version of your app
- Apple sign in
- Mac notarization service which improves trust by the user for downloading an app from the web
- yearly major releases of Xcode with new features
- analytics dashboard and crash reporting
- and the list goes on and on.

Do Stripe, PayPal, or other payment processors offer the above services?

Hmmm... so it sounds like a disadvantage to have multiple payment processors for apps.

That is my personal feeling. I like and purposefully bought into the "walled garden" Apple ecosystem and really don't want it to be legislated into extinction.

I also find it amusing when others claim that alt-stores and alt-payment processors will benefit consumers by way of less expensive apps, it won't happen.

And I also agree with @MuppetGate , have fun trying to get a refund when your infant accidentally makes $1000 in IAP if Apple is no longer the payment processor.
Score: 9 Votes (Like | Disagree)

As a consumer... what difference does it make if an app uses a different payment processor?

Will I have a choice between two or more payment processors when I make an in-app purchase?

In the physical space... I've never once considered the payment processor Walgreens uses. Or McDonalds.

So I'm just wondering how this will affect consumers in the app space.

I think you’ll only see a real difference when you try to get a refund.
Score: 9 Votes (Like | Disagree)

Great, there is your choice!

That's not really how laws work. My takeaway from this is that Google, which could even point to the existence of third-party-stores, still proactively complies with the DMA.