The iPhone 15 Pro Max will be the sole Apple smartphone of 2023 to get a periscope camera lens and benefit from greatly enhanced optical zoom, according to analyst Ming-Chi Kuo. 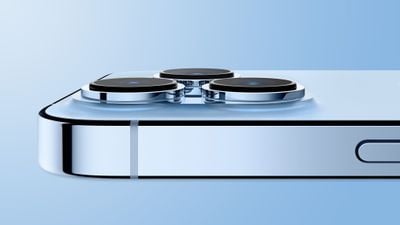 Rumors about the iPhone getting a periscope lens have been circulating since early 2020, when Kuo first mentioned the possibility. The analyst initially said that a periscope lens would be an iPhone 14 Pro feature, but more recently he has said the lens type will debut in a "Pro" model of the ‌iPhone 15‌ series, a prediction that analyst Jeff Pu has also made.

In a periscope system, light entering the telephoto lens is reflected by an angled mirror towards the camera's image sensor. The change in direction in which the light travels allows for a longer "folded" telephoto setup inside phones, enabling users to zoom in further without any blurriness. Largan and Genius are expected to be Apple's main suppliers of such a lens in 2023.

There are already some Android smartphones with periscope lenses. Samsung's Galaxy S22 Ultra for instance features up to 10x optical zoom and 100x digital zoom. With the addition of a periscope lens, the ‌iPhone 15‌ Pro Max would follow suit. Kuo says the 1/3" sensor will have 12-megapixel resolution with f/2.8 aperture and up to 6x optical zoom, with sensor-shift stabilization. For context, iPhone 13 Pro models are limited to 3x optical zoom.

Looking ahead, Kuo also believes both ‌iPhone‌ 16 Pro models in 2024 will use the same or similar periscope lens as the one used in the ‌iPhone 15‌ Pro Max, with Apple continuing its trend of setting apart standard and Pro models by reserving certain higher-end hardware features for the latter.

This year, Apple is expected to introduce improvements to the telephoto and wide-angle lens on its ‌iPhone 14 Pro‌ models. Kuo says that Apple will upgrade the telephoto camera from a 6-element lens to a 7-element lens.

Kuo also believes that the 2022 Pro ‌iPhone‌ models will feature a 48-megapixel Wide camera, which would be a major improvement over the current 12-megapixel camera, and 8K video recording capabilities that will allow iPhone-recorded videos displayed on an 8K display or TV to provide "a better user experience."

Yeah, that's right! Blame Apple for the laws of physics, which limit the amount of space the regular Pro can have, thus not being able to fit a periscope system.

We have heard this excuse before and the magically in a later iPhone the laws of physics have magically changed.
Score: 40 Votes (Like | Disagree)

User 6502
Usual greedy apple. Still not buying a huge phone, I already have a tablet I don’t want to have to use a crane to answer phone calls.
Score: 37 Votes (Like | Disagree)

Leon Ze Professional
I'm surprised it's taking Apple this long to introduce a periscopic lens in any iPhone...
Score: 24 Votes (Like | Disagree)

xxray
I hate when Apple does this.
Score: 17 Votes (Like | Disagree)

Motawa
No thanks I already have an iPad
Score: 16 Votes (Like | Disagree)

It's a very typical trickling of tech. It's easy to overcome. Just don't feel FOMO, and wait next year to enjoy the tech at the regular Pro model.
Score: 11 Votes (Like | Disagree)
Read All Comments