T-Mobile is the "best" carrier in the United States when factoring in connection speed and reliability, according to PCMag's annual mobile network comparison, the results of which were released today. 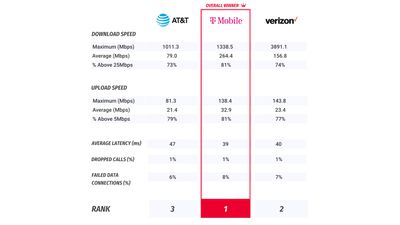 PCMag drove over 10,000 miles through 30 cities to test AT&T, T-Mobile, and Verizon connection speeds. In the past, this study focused on the fastest connections, but this year, PCMag looked for the best overall network. T-Mobile ended up winning in 18 out of 30 cities, while Verizon won in eight and AT&T won in four.

T-Mobile has improved its service in rural areas, though it still had more data dead zones outside of the rural Northeast than Verizon and AT&T. T-Mobile had the best 5G coverage because of its Sprint acquisition, which came with mid-band spectrum, but AT&T and Verizon may catch up at some point in the future.

PCMag was testing 5G speeds, so the fastest connections will require a 5G smartphone. The testing indicates that on T-Mobile and Verizon, there is a growing gulf between 4G speeds and 5G speeds. Verizon and T-Mobile have "dramatically increased nationwide speeds" thanks to the expansion of mid-band 5G networks, but AT&T's speed has dropped.

All tests were done with the Samsung Galaxy S22+, a device that had the "best network performance" in PCMag's test. Scores were weighted with speed accounting for 60 percent of the score and reliability accounting for 40 percent. Call success, data success, download speeds, upload speeds, and latency were all taken into account.

PCMag's full results can be read over at its website for those interested in a deeper breakdown of the scores achieved by AT&T, Verizon, and T-Mobile. The site also has detailed information by region and for each city that was visited.

jntdroid
T-Mobile has definitely improved, but I can still drive through my region (south central U.S.) and have multiple completely dead spots. That simply doesn't happen on Verizon or even AT&T, who almost always hold on to the lowest level of service (rather than none at all), even off the beaten path.

Yes, T-Mobile is likely faster in general, but I still prefer to have the most comprehensive coverage. I try them once every couple of years and keep coming to the same conclusion (as recently as 4 months ago with a 5G phone). I'm glad they're improving for competition's sake, though.
Score: 27 Votes (Like | Disagree)

Karma*Police
How much did T-Mobile pay these guys? I have it and it’s definitely no better than ATT. Not only that they got hacked twice and some hacker now has everything they need to steal my identity.
Score: 22 Votes (Like | Disagree)

Dark_Omen
So the point is - U.S Carriers still suck and have slow data speeds and high failed connections.
Score: 20 Votes (Like | Disagree)

TheYayAreaLiving ?
T-Mobile has come a very long day. But I have trust issues with them due to data breach. Hopefully, their network is also well secured and encrypted.
Score: 10 Votes (Like | Disagree)

Great for city dwellers, I guess.
Score: 9 Votes (Like | Disagree)

I live in southern CA and Verizon sucks inside my LA fitness. It’s untouchable on Ultra Wideband, though. I’ve had all 3 over the years and I never liked any of them all that much to stay loyal.

I’ve had a pretty good experience with Verizon over the past few years. I’m mostly in N OC.

I know this isn’t the same as in a gym, but was at an Angel game a few weeks ago and my eyes popped out! ?