As part of its rebuilt Home app experience in iOS 16 and iPadOS 16, Apple appears to be removing support for using an iPad as a Home Hub. 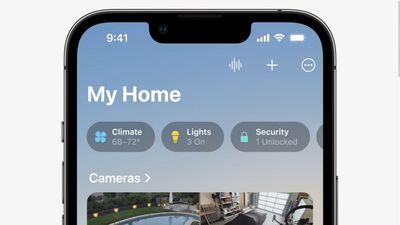 For those unfamiliar with what a Home Hub does, the HomeKit framework allows you to remotely control compatible smart home devices, but some features like location-based automation require a designated Home Hub, which remains powered on and connected at your home when you're away.

For example, with a Home Hub, some thermostats can change the temperature to something more economical whenever you leave your home by using a virtual geographical boundary (geofencing). A Home Hub also allows you to use Siri to trigger actions when you're away from home.

In iOS 15, Apple lets you designate an Apple TV, HomePod, or ‌iPad‌ as a Home Hub, but in ‌iOS 16‌, which is currently in beta, "Only ‌Apple TV‌ and ‌HomePod‌ are supported as home hubs," according to a footnote in Apple's iOS 16 preview webpage.

Despite this change, it should be noted that ‌iPadOS 16‌ beta 1 still allows you to designate an ‌iPad‌ as a Home Hub. However, given Apple's marketing webpage for ‌iOS 16‌ as well as interface notes in ‌iPadOS 16‌, it's likely that this ability will be removed in a later version of the software.

iPads still available as Home Hubs in ‌iPadOS 16‌ beta 1
Apple hasn't explained why ‌iPad‌ has dropped from the list of compatible Home Hub devices in ‌iOS 16‌, but it could have something to do with Apple's announcement that ‌HomeKit‌ will support the upcoming Matter cross-platform compatibility smart home standard when the latter goes live.

Matter will allow ‌HomeKit‌ users to integrate more IoT device categories into their smart homes than ever before, and control them with the Home app and using ‌Siri‌. Matter is due to launch later this year, which is likely to be around the time that ‌iOS 16‌ is officially released to the public in the fall.

AMagicianNamedJOBs
I just want the ability to disable Homepods from acting as hubs, like you can do on Apple TV. Or at the very least set an order of preference. (I want my AppleTV 4K 2021 to always be the hub since it's connected via ethernet and on a UPS).
Score: 30 Votes (Like | Disagree)

Think|Different
GOOD! If you use Homekit you know this is a good thing. My wired ATV hub acts differently when primary than when my OG HomePods are hubs versus when even my HomePods Minis are hubs – the wireless hubs are never as stable, even on an otherwise rock solid Eero network. NEED to be able to set a default hub or, if that is simply out of the cards, Apple's gotta prioritize wired vs wireless on the backend, come on.
Score: 15 Votes (Like | Disagree)

Agneev
I don't see how this is good. I have an older iPad that I use as a hub.
Score: 14 Votes (Like | Disagree)

Seems highly unlikely to me that this person even exists...the person who's only home hub is an iPad AND they actually rely on it in this way.

I exist. I don't need an Apple TV and I don't want a smart speaker.
Score: 14 Votes (Like | Disagree)

Andres Cantu
That rumor about the HomePod with a screen combo is looking more likely now.
Score: 14 Votes (Like | Disagree)

TheYayAreaLiving ?
I don’t like How Apple removes these features and not say a word. Hoping people won’t find out. It would be nice if Apple can give us an explanation why it’s being removed or dropped.
Score: 13 Votes (Like | Disagree)
Read All Comments