The Glasgow Times today reports that employees at Apple's Buchanan Street store in Scotland are about to become the first branch in the United Kingdom to unionize. 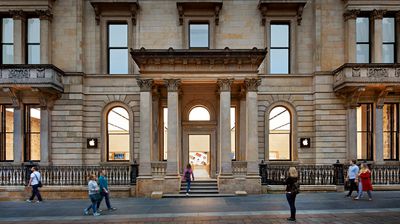 Staff at Apple Glasgow are said to have filed for Voluntary Union Recognition with Apple after joining the country's general workers union, GMB Scotland. They claim low wages, lack of pay transparency, and unfair shift patterns have pushed them to make the move.

An Apple worker, who asked to remain anonymous, told the paper: "In the UK Apple have staff forums, but these are continually shown to be ineffectual and feedback is ignored. It is a one-way conversation.

"We need our own representatives and a proper voice to change things. People are suffering with the cost-of-living crisis. We need a pay rise, pay transparency and a voice," they added.

There has reportedly been frustration over recent changes to scheduling resulting in workers struggling to find a work-life balance. Store staff in Glasgow also said they earn around £12 ($15) an hour and will demand a pay rise should union recognition be received.

Responding to news of the move by staff at Apple Glasgow, an Apple spokesperson was quoted as saying:

"We are fortunate to have incredible retail team members and we deeply value everything they bring to Apple.

"We are pleased to offer very strong compensation and benefits, including private healthcare, enhanced parental leaves, paid family leave, annual stock grants and many other benefits for every team member."

Apple has since agreed to improve working conditions for retail employees in the U.S. amid unionization efforts, but not before the company attempted to thwart employee efforts by disseminating anti-union videos.

krspkbl
my local store! so proud of them :)
Score: 20 Votes (Like | Disagree)

steve09090
I can’t believe there are 1st world countries without unions. In Australia we have the "miscellaneous workers union" to cover those without. No matter who it is, or as altruistic any employer maybe, the worker should be able to have rights to question behaviours of their employer.
Score: 19 Votes (Like | Disagree)

I can’t believe there are 1st world countries without unions. In Australia we have the "miscellaneous workers union" to cover those without. No matter who it is, or as altruistic any employer maybe, the worker should be able to have rights to question behaviours of their employer.

Me neither. As a Norwegian I'm quite frankly baffled when employees are arguing against unions. When I see what unions have done here in Norway to keep regular jobs up-to-speed with inflation ++ it really is a non-brainer. We don't even have a minimum wage, but still we have one of the lowest wage inequalities in the world.
Score: 17 Votes (Like | Disagree)

There's power in a factory, power in the land
Power in the hand of the worker
But it all amounts to nothing if together we don't stand
There is power in a union

Now the lessons of the past were all learned with workers' blood
The mistakes of the bosses we must pay for
From the cities and the farmlands to trenches full of mud ('https://genius.com/15267614/Billy-bragg-there-is-power-in-a-union/Trenches-full-of-mud')
War has always been the bosses' way, sir

The union forever defending our rights ('https://genius.com/7158476/Billy-bragg-there-is-power-in-a-union/The-union-forever-defending-our-rights')
Down with the blackleg, all workers unite ('https://genius.com/6366003/Billy-bragg-there-is-power-in-a-union/Down-with-the-blackleg-all-workers-unite')
With our brothers and our sisters from many far-off lands
There is power in a union

Now I long for the morning that they realize
Brutality and unjust laws cannot defeat us
But who'll defend the workers, who cannot organize
When the bosses send their lackeys out to cheat us?

Money speaks for money, the devil for his own
Who comes to speak for the skin and the bone?
What a comfort to the widow, a light to the child
There is power in a union

The union forever defending our rights
Down with the blackleg, all workers unite
With our brothers and our sisters, together we will stand
There is power in a union
Score: 11 Votes (Like | Disagree)

People forget that a union is just another money-making enterprise.

Well, yes, but the money they make is for supporting their members, not for generating profit. It's a shame they weren't able to help with you situation, but without more information it's difficult to pass much comment; if it's a situation where they're legitimately unable to help, there isn't much that can be done. A union isn't a catch-all solution for any workplace issue, but it's better to have the support of one in the case of a conflict between yourself and your employer than not.
Score: 9 Votes (Like | Disagree)
Read All Comments