With iOS 16, Apple is giving users unprecedented levels of customization for the Lock Screen, letting them change the font and colors, add widgets, and so much more. None of those customization features, however, are coming to iPadOS 16. 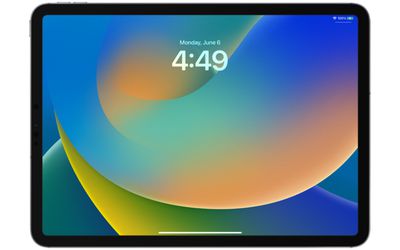 While in most releases, iOS and iPadOS share many of the same features, this year there seems to be a larger separation between the two platforms. On ‌iPadOS 16‌, at least in its initial first beta, users can not customize their lock screen with custom widgets, colors, and themes. Instead, Apple has just changed the default font for the clock.

Despite ‌iPadOS 16‌ missing out on the lock screen customization features, it remains a significant release. Most notably, Apple has brought window support for M1-based iPads with a new feature called "Stage Manager." ‌iPadOS 16‌ also beings desktop-class app features to the iPad such as new context menus, undo and redo in more apps, and more.

‌iPadOS 16‌ and ‌iOS 16‌, alongside watchOS 9 and macOS Ventura, are available to developers for beta testing, with public betas planned for each in July.

joshseibert
It’s this kind of inconsistency that confuses me.
Score: 56 Votes (Like | Disagree)

Harrycooke
This way they can use it as a brand new feature coming to iPads for iPadOS 17!
Score: 40 Votes (Like | Disagree)

infinitejest
This is bananas. They always leave out key iOS features for no reason.
Score: 31 Votes (Like | Disagree)

_Spinn_
Well this is a big disappointment!
Score: 19 Votes (Like | Disagree)

Rudy69
Did they 'split it' from iOS just so they could explain why they don't give it all the new features right away? lol
Score: 11 Votes (Like | Disagree)

Leon Ze Professional
"None of those customisation features, however are coming to iPadOS 16"

Put simply: WHY?
Score: 10 Votes (Like | Disagree)
Read All Comments

Tuesday June 7, 2022 2:10 am PDT by Sami Fathi
With iOS 16, Apple is bringing the full-screen music player back to the Lock Screen, offering an entirely new view that puts album art in the center with controls at the bottom. The full-screen music player on the lock screen was last available with iOS 10 and is now back with iOS 16 as part of a lock screen redesign. On iOS 16, users will be able to change the Lock Screen font and colors,...
Read Full Article • 31 comments

Sunday May 29, 2022 7:35 am PDT by Hartley Charlton
Apple is planning to debut an enhanced Lock Screen with iOS 16, improved multitasking in iPadOS 16, refined navigation in watchOS 9, additional smart home features in tvOS 16, redesigned apps in macOS 13, and more, according Bloomberg's Mark Gurman. In the latest edition of his "Power On" newsletter, Gurman outlined his expectations for all of Apple's upcoming operating systems, including...
Read Full Article • 114 comments

Wednesday June 8, 2022 12:42 pm PDT by Sami Fathi
iPadOS 16 is now available to developer beta testers with improvements in Messages and Safari and the all-new Stage Manager, enabling multiple app windows and Mac-like multitasking on M1 iPads. As has always been the case, many features are shared across iOS and iPadOS, and that's certainly true this year. iPadOS 16 gains several major new features from iOS 16, including the ability to edit...
Read Full Article • 54 comments

Wednesday June 22, 2022 10:07 am PDT by Juli Clover
Apple today seeded the second betas of upcoming iOS 16 and iPadOS 16 updates to developers for testing purposes, with the updates coming two weeks after Apple unveiled the new software at WWDC and released the initial betas. Registered developers can download the iOS and iPadOS 16 profiles from the Apple Developer Center, and once installed, the betas will be available over the air. Given...
Read Full Article • 61 comments

Monday June 6, 2022 3:29 pm PDT by Juli Clover
Apple on Monday held a keynote event that saw the introduction of iOS 16, iPadOS 16, macOS 13 Ventura, watchOS 9, and the new M2 Apple silicon chip, which is soon-to-be available in the MacBook Air and 13-inch MacBook Pro. Subscribe to the MacRumors YouTube channel for more videos. It was a crazy event where Apple introduced feature after feature for almost two hours straight. For those who...
Read Full Article • 96 comments

Tuesday June 28, 2022 10:07 am PDT by Juli Clover
Apple today seeded the fourth betas of upcoming iOS 15.6 and iPadOS 15.6 updates to developers for testing purposes, with the new software coming two weeks after the release of the third betas. Developers can download iOS 15.6 and iPadOS 15.6 through the Apple Developer Center or over the air after the proper profile has been installed on an iPhone or iPad. We don't yet know what might be ...
Read Full Article • 29 comments