Apple today announced watchOS 9 for the Apple Watch, which will include more watch face options with more in-depth customization options, updates to notifications, new features in the Workout app, and more. 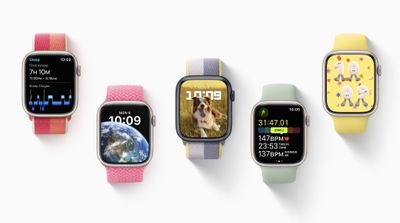 In regards to specific apps, the Workout app has been updated with more detailed metrics for measuring performance and a new training experience to help you reach your fitness goals. You can see different Workout Views by rotating the Digital Crown, changing between different training styles during a workout.

Heart Rate Zones help monitor the intensity of a workout, and Custom Workouts allow for work and rest intervals throughout a workout. Additionally, new alerts include pace, power, heart rate, cadence, and more, can be added to guide you through the workout.

Runners will be able to track metrics like stride length, ground contact time, and vertical oscillation. These appear in the Fitness app summary and in the Health app, allowing runners to track trends over time and learn from their patterns.

Frequently used routes allow runners to race against their own ghost times, including their best or last results, and receive alerts during the run for being ahead or behind their ghost. Lastly, there are a few updates to swimming workouts, like kickboard detection as a new stroke type.

Apple Watch will now be able to track more sleep insights with the new sleep stages feature. Using signals from the accelerometer and heart rate sensor, ‌watchOS 9‌ can detect when users are in REM, Core, or Deep sleep. All of these stats will be available in the Sleep app upon waking up.

Anyone diagnosed with AFib can use the new AFib History feature in ‌watchOS 9‌ to access important information. This includes an estimate of how frequently a user's heart rhythm shows signs of AFib, and more, and this feature has been cleared by the FDA.

Next, there's a new Medications experience on ‌watchOS 9‌ and ‌iOS 16‌ that can track a user's medications, vitamins, and supplements. They can create a medications list, set up schedules and reminders, and view information on their meds in the Health app.

The Health app tracks all of the medications, and can even alert users if it sees potential critical interactions between two meds that were added (for people in the United States). Otherwise, it'll let users create schedules to remind themselves to take their meds.

‌watchOS 9‌ is now available as a developer beta to Apple Developer Program members, and a public beta will arrive next month. It'll launch to the public this fall as a free software update for Apple Watch Series 4 or later, paired with ‌iPhone‌ 8 or later and iPhone SE (second-gen) or later, running ‌iOS 16‌.

Again nothing that made me go wow, this wwdc is getting worse by the min, this is embarrassing

Then quit watching, buy something else and go on with your life. It's really that easy. It's more embarrassing complaining on MacRumors.
Score: 10 Votes (Like | Disagree)

Minato1990
Yes for that new running workout update **** YES
IM THROWING MY INTERVAL APP IN THE TRASH WHEN THIS COMES OUT LFG
Score: 4 Votes (Like | Disagree)

The current product line would be awesome if "it just works" was still true. I don't care about 80 new emojis. I just want software quality control back at Jobs-era levels.

That's right. To me Apple seems extremely lazy and comfortable. I don't care about emojis either and I just don't get the obsession with them. It's very apparent that Apple is focusing too much on hardware and software is left behind even though it's the soul of any device.
Score: 3 Votes (Like | Disagree)

PaladinGuy
The sleep and interval stuff is going to endanger more than a few third party apps.
Score: 3 Votes (Like | Disagree)

Love the medication tracking. Hopefullly we get food tracking in the future as well.
Score: 3 Votes (Like | Disagree)

Very much agree, but to be honest... Apple has lost it’s magic years ago. Not to mention that their keynotes went from fun, engaging and informative to a snooze fest that one could get only from Microsoft or Google. I’m glad that I had the honor to use Apple products while Steve Jobs was there. Those were truly magical times. I know it’s annoying to say this but it’s true.

The current product line would be awesome if "it just works" was still true. I don't care about 80 new emojis. I just want software quality control back at Jobs-era levels.
Score: 3 Votes (Like | Disagree)
Read All Comments