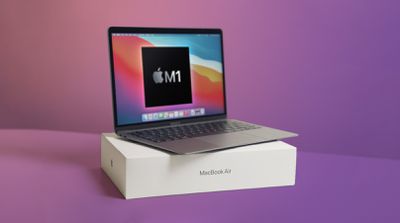 We've seen this computer drop down to a lower price in past sales, but this is still a solid second-best price on the MacBook Air. The Silver color option has faster shipping estimates, targeted for around May 30 for most places in the United States.

If you know what you are buying why not?
Sure there will be an M2 coming, we do not know when and at what price. so if you need a computer now, this is a pretty useful computer (huge battery life) and you can have a deal on it.

So unless you MUST have the latest and can wait, it the price fits the bill..
Score: 5 Votes (Like | Disagree)

That spec seems like it would only work for a narrow band of users that basically don’t store data locally. 256GB is not much.

I have several 256GB MacBooks, and my wife uses one daily.

With iCloud and/or OneDrive, etc., it's not an issue. I don't edit videos, it's hard to accumulate >100GB of office docs and similar. Even if I had >200GB of photos videos, the average user doesn't need all of them available all the time.

In other words, if you give most (not narrow band) users (who are looking at computers in this price point), they'd have to work fairly hard to fill up 200GB. Unless they were morally opposed to cloud and/or external backups.
Score: 4 Votes (Like | Disagree)

Orange Bat
Tempted. I think I will hold out, though, as I still think 16GB is worth the extra cost. Also, we’re so close to WWDC that if Apple does introduce an M2 Air the prices may go even lower.
Score: 1 Votes (Like | Disagree)

People expecting a new MacBook model at WWDC are up to disappointment. Apple may reveal the M2 processor but that still unlikely, I don't think the new MacBook Air will be revealed until November. I doubt Apple will release any new Mac running Monterey at this point. The M2 MacBooks will run on the next macOS version only.

Maybe. If I were going to place a bet I'd say that we'll get a pre-announcement of the new Mac Pro (but no release until Q4) and nothing else - nobody here knows - and the rumors for the last event were all over the place showing that even the analysts were guessing...

Bottom line is that the MBA is now 18 months old and we're only 2 weeks away from a major annual Apple media event at which Apple has been known to launch hardware (and remember the WWDC keynote speech has always been primarily a media event - whoever the rest of the conference may be for).

So, no, unless you have an urgent need and can't wait two weeks, now is not the optimum time to buy a MBA, mini or 13" MBP if you're at all concerned about having the very latest kit.

Of course, the flip side of that is that these models are now tried and tested - so if you're not worried about getting sand kicked in your face because you don't have the latest model in 3 months time, by all means take advantage of the discounts. A little bird tells me that Apple probably won't be lowering prices at WWDC.
Score: 1 Votes (Like | Disagree)
Read All Comments