An image showing a series of third-party cases for the forthcoming iPhone 14 lineup has turned up on Weibo, providing a stark reminder of just how large the camera housing on Apple's flagship smartphones is about to become. 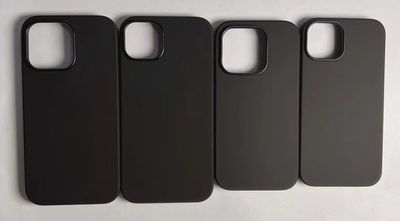 While significant design changes aren't expected, all of these models are likely to see camera upgrades, and consequently the camera bumps are set to get about 5% larger, with the difference being most notable on the Pro models (corresponding in the image with the first and third cases from the left.)

All iPhone 14 models are expected to see upgrades to the Ultra Wide camera on the rear of the device, while the iPhone Pro models could see significant improvements to the main wide-angle camera and updates to the telephoto lens.

Apple analyst Ming-Chi Kuo believes that the iPhone 14 Pro models will feature a 48-megapixel Wide camera, which would be a major improvement over the current 12-megapixel camera, as well as 8K video recording capabilities.

The 48-megapixel camera in the iPhone 14 Pro models is also likely to be capable of taking 12-megapixel shots through a process known as pixel-binning. Pixel binning merges data from multiple smaller pixels on the camera's image sensor into one "super-pixel" for improved low-light sensitivity.

Whether the enormity of the camera housing is a worthwhile trade-off for enhanced photo capabilities will be something users will have to decide for themselves, but suffice to say that cases designed for the iPhone 13 models are unlikely to fit the iPhone 14 models because of the size increase.

Apple is expected to introduce the iPhone 14 models at an event likely to be held in September 2022, if Apple follows previous launch timelines. For everything we know about the new lineup, be sure to check out our dedicated iPhone 14 and iPhone 14 Pro rumor roundups.

Shalev
Just a reminder.
Where is the style, the elegance? that's disgusting by now I must say.

Just a reminder.
Where is the style, the elegance? that's disgusting by now I must say.

bobtem
A camera with a phone on the back…
Score: 19 Votes (Like | Disagree)

Reason077
This camera bloat has got to stop at some point, right? It's already a bit out of control. Maybe split the line so the Pro has the huge camera bump but the standard iPhone models go back to a more reasonable sized camera?
Score: 10 Votes (Like | Disagree)

Jim Lahey
These phones will be half a kilo in a few years. Come back thin & light, all is forgiven ?
Score: 9 Votes (Like | Disagree)
Read All Comments

Monday April 18, 2022 3:22 am PDT by Tim Hardwick
A photo claiming to show molds of Apple’s upcoming iPhone 14 series models has appeared online, offering another preview of the relative sizes of the rumored devices. It's worth bearing in mind that the molds shown in the image sourced from Weibo have likely been made for use in the production of third-party iPhone cases rather than actual handsets. Still, they do appear to line up with...
Read Full Article • 206 comments

Tuesday May 10, 2022 6:28 am PDT by Joe Rossignol
Samsung is in the final stage of developing a 200-megapixel camera for use on its next-generation Galaxy S23 Ultra smartphone, which is expected to be announced in early 2023, according to South Korea's ETNews. By comparison, the iPhone 13 Pro has a 12-megapixel main camera, but the iPhone 14 Pro is widely rumored to feature an upgraded 48-megapixel camera. Like the Galaxy S22 Ultra,...
Read Full Article • 142 comments

Monday June 13, 2022 11:40 am PDT by Juli Clover
Prior to the launch of new iPhone models, case makers often create dummy models based on leaked schematics and specifications. We've known about the design of the iPhone 14 lineup for some time now, and this week, we got a set of dummy units to see the design updates for ourselves. Subscribe to the MacRumors YouTube channel for more videos. Because there's a lot of money in having a case...
Read Full Article • 197 comments

Thursday April 28, 2022 5:46 am PDT by Sami Fathi
New images of 3D-printed mockups, likely based on relatively accurate dimensions for the upcoming iPhone 14 lineup, have offered a close look at the design changes Apple is planning for the 2022 iPhones, particularly the enlargement of the camera systems compared to the latest iPhone 13 series. The iPhone 14 series will feature larger camera systems on the back, according to previous rumors...
Read Full Article • 45 comments

Monday June 27, 2022 8:32 am PDT by Joe Rossignol
Apple suppliers have begun shipping components for iPhone 14 models, which are expected to launch in September as usual, according to Taiwanese industry publication DigiTimes. The report likely refers to components being shipped to manufacturers like Foxconn for final assembly of iPhone 14 models over the next few months. "Component suppliers have kicked off recently their shipments for the...
Read Full Article • 66 comments